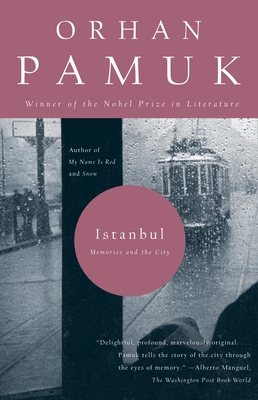 Memories and the City (Vintage International)

A shimmering evocation, by turns intimate and panoramic, of one of the world’s great cities, by its foremost writer. Orhan Pamuk was born in Istanbul and still lives in the family apartment building where his mother first held him in her arms. His portrait of his city is thus also a self-portrait, refracted by memory and the melancholy–or hüzün– that all Istanbullus share: the sadness that comes of living amid the ruins of a lost empire.With cinematic fluidity, Pamuk moves from his glamorous, unhappy parents to the gorgeous, decrepit mansions overlooking the Bosphorus; from the dawning of his self-consciousness to the writers and painters–both Turkish and foreign–who would shape his consciousness of his city. Like Joyce’s Dublin and Borges’ Buenos Aires, Pamuk’s Istanbul is a triumphant encounter of place and sensibility, beautifully written and immensely moving.

Praise For Istanbul: Memories and the City (Vintage International)…

Delightful, profound, marvelously original. . . . Pamuk tells the story of the city through the eyes of memory." –The Washington Post Book World"Far from a conventional appreciation of the city's natural and architectural splendors, Istanbul tells of an invisible melancholy and the way it acts on an imaginative young man, aggrieving him but pricking his creativity." –The New York Times"Brilliant. . . . Pamuk insistently discribes a]dizzingly gorgeous, historically vibrant metropolis." –Newsday “A fascinating read for anyone who has even the slightest acquaintance with this fabled bridge between east and west.” –The Economist

Orhan Pamuk's novel My Name Is Red won the 2003 IMPAC Dublin Literary Award. His work has been translated into more than twenty languages. He lives in Istanbul.
Loading...
or
Not Currently Available for Direct Purchase