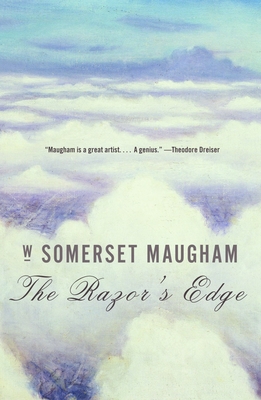 Larry Darrell is a young American in search of the absolute. The progress of this spiritual odyssey involves him with some of Maugham's most brillant characters - his fiancee Isabel, whose choice between love and wealth have lifelong repercussions, and Elliot Templeton, her uncle, a classic expatriate American snob. The most ambitious of Maugham's novels, this is also one in which Maugham himself plays a considerable part as he wanders in and out of the story, to observe his characters struggling with their fates.

“[Maugham’s] excessively rare gift of story-telling . . . is almost the equal of imagination itself.” –The Sunday Times (London)

“It is very difficult for a writer of my generation, if he is honest, to pretend indifference to the work of Somerset Maugham. . . . He was always so entirely there.” –Gore Vidal

“Maugham remains the consummate craftsman. . . . [His writing is] so compact, so economical, so closely motivated, so skillfully written, that it rivets attention from the first page to last.” –Saturday Review of Literature

W. Somerset Maugham was one the twentieth century’s most popular novelists as well as a celebrated playwright, critic, and short story writer. He was born in Paris but grew up in England and served as a secret agent for the British during World War I. He wrote many novels, including the classics Of Human Bondage, Cakes and Ale, Christmas Holiday, The Moon and Sixpence, Theatre, and Up at the Villa.
Loading...
or support indie stores by buying on