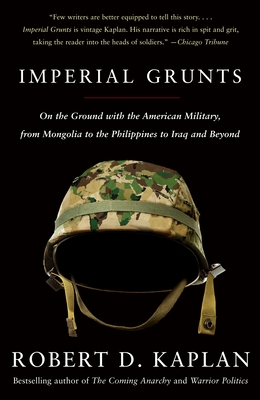 On the Ground with the American Military, from Mongolia to the Philippines to Iraq and Beyond (Vintage Departures)

A fascinating, unprecedented first-hand look at the soldiers on the front lines on the Global War on Terror. Plunging deep into midst of some of the hottest conflicts on the globe, Robert D. Kaplan takes us through mud and jungle, desert and dirt to the men and women on the ground who are leading the charge against threats to American security. These soldiers, fighting in thick Colombian jungles or on dusty Afghani plains, are the forefront of the new American foreign policy, a policy being implemented one soldier at a time. As Kaplan brings us inside their thoughts, feelings, and operations, these modern grunts provide insight and understanding into the War on Terror, bringing the war, which sometimes seems so distant, vividly to life.

Praise For Imperial Grunts: On the Ground with the American Military, from Mongolia to the Philippines to Iraq and Beyond (Vintage Departures)…

“Few writers are better equipped to tell this story . . . Imperial Grunts is vintage Kaplan. His narrative is rich in spit and grit, taking the reader into the heads of soldiers.”–Chicago Tribune“The grunts Kaplan describes so brilliantly will be out there representing America in the chaotic zones of a dangerous world, and to understand them one is well advised to read this book.”–The Washington Post Book World“A consistently thought-provoking and vividly evocative book . . . that challenges many preconceptions about the place of the military in American life and the world”–The New York Review of Books “Provocative and superbly written. . . . [Kaplan] offers the reader an enlightened way to understand what is happening in the world.”–San Francisco Chronicle“Mr. Kaplan has been kept at arm's length by wonks and intellectuals. Yet through the medium of travel writing and the voices of the soldiers he quotes, Mr. Kaplan captures the simple truths that elude the elites. . . . Imperial Grunts stands in vivid and bracing counterpoint to most academic analyses of the Pax Americana . . .A great story, very well told.” –The New York Sun“One of the most important books of the last several years. Robert Kaplan uses his prodigious energy and matchless reporting skills to takes us on to the front lines with the new warrior-diplomats who use weapons, imagination, and personal passion to protect and advance the interests of the United States. This is a generation every American should come to know.”–Tom Brokaw“No recent book so well or so vividly portrays the challenges of the modern United States military. With an impressive grasp of the complexities of military missions worldwide, Robert Kaplan exposes the reader to the world of the modern soldier, sailor, airman, and Marine. A must read for both civilian and military leaders.”–General Barry R. McCaffrey, United States Army (Ret.), Bradley Distinguished Professor of International Security Studies, United States Military Academy“Robert Kaplan has brilliantly captured the story of today’s U.S. military operating in far-flung places on strange missions. Imperial Grunts is the most insightful and superbly written account of soldiering in the New World Disorder to date. It is a must read for all Americans.”–General Anthony C. Zinni, United States Marine Corps (Ret.)“Kaplan infuses us with a sense of hope about the future. Through astonishing observations, truths, and stories, Imperial Grunts introduces a brand-new way of thinking about the enduring virtue of the American spirit.”–George Crile, author of Charlie Wilson’s War“Imperial Grunts is vintage Robert Kaplan, combining a deep appreciation of history and wonderfully vivid writing with an infectious wanderlust.”–Max Boot, Senior Fellow, National Security Studies, the Council on Foreign Relations, author of The Savage Wars of Peace“Splendid! This is the finest work in print about today’s American fighting men and the challenges they face around the globe. Kaplan’s courage in researching this book under combat conditions is complemented by his integrity and great literary skill. Imperial Grunts simply could not be better.”–Ralph Peters, author of Beyond Baghdad