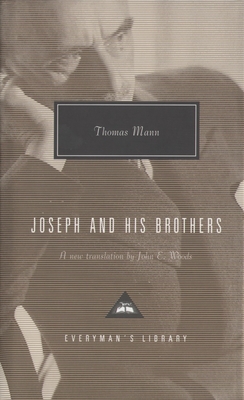 Joseph and His Brothers

This remarkable new translation of the Nobel Prize-winner’s great masterpiece is a major literary event.

Thomas Mann regarded his monumental retelling of the biblical story of Joseph as his magnum opus. He conceived of the four parts–The Stories of Jacob, Young Joseph, Joseph in Egypt, and Joseph the Provider–as a unified narrative, a “mythological novel” of Joseph’s fall into slavery and his rise to be lord over Egypt. Deploying lavish, persuasive detail, Mann conjures for us the world of patriarchs and pharaohs, the ancient civilizations of Egypt, Mesopotamia, and Palestine, and the universal force of human love in all its beauty, desperation, absurdity, and pain. The result is a brilliant amalgam of humor, emotion, psychological insight, and epic grandeur.

Now the award-winning translator John E. Woods gives us a definitive new English version of Joseph and His Brothers that is worthy of Mann’s achievement, revealing the novel’s exuberant polyphony of ancient and modern voices, a rich music that is by turns elegant, coarse, and sublime.

“This excellent new translation by John E. Woods is a cause for celebration: first, because Joseph and His Brothers is in fact a great novel that will now be discovered by a new generation of readers; and second, because Woods himself is to be credited with an extraordinary achievement . . . Woods tackles the challenges of Mann’s wide-ranging diction with exuberance . . . Mann has finally found his ideal English translator.” –New Republic, Ruth Franklin

Thomas Mann was born in 1875 in Germany. He was only twenty-five when his first novel, Buddenbrooks, was published. In 1924 The Magic Mountain was published, and, five years later, Mann was awarded the Nobel Prize for Literature. Following the rise of the Nazis to power, he left Germany for good in 1933 to live in Switzerland and then in California, where he wrote Doctor Faustus (first published in the United States in 1948). Thomas Mann died in 1955.
Loading...
or support indie stores by buying on
(This book is on backorder)