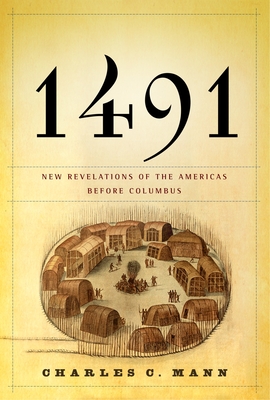 New Revelations of the Americas Before Columbus

A groundbreaking study that radically alters our understanding of the Americas before the arrival of the Europeans in 1492.

Traditionally, Americans learned in school that the ancestors of the people who inhabited the Western Hemisphere at the time of Columbus’s landing had crossed the Bering Strait twelve thousand years ago; existed mainly in small, nomadic bands; and lived so lightly on the land that the Americas was, for all practical purposes, still a vast wilderness. But as Charles C. Mann now makes clear, archaeologists and anthropologists have spent the last thirty years proving these and many other long-held assumptions wrong.

In a book that startles and persuades, Mann reveals how a new generation of researchers equipped with novel scientific techniques came to previously unheard-of conclusions. Among them:

• In 1491 there were probably more people living in the Americas than in Europe.
• Certain cities–such as Tenochtitlán, the Aztec capital–were far greater in population than any contemporary European city. Furthermore, Tenochtitlán, unlike any capital in Europe at that time, had running water, beautiful botanical gardens, and immaculately clean streets.
• The earliest cities in the Western Hemisphere were thriving before the Egyptians built the great pyramids.
• Pre-Columbian Indians in Mexico developed corn by a breeding process so sophisticated that the journal Science recently described it as “man’s first, and perhaps the greatest, feat of genetic engineering.”
• Amazonian Indians learned how to farm the rain forest without destroying it–a process scientists are studying today in the hope of regaining this lost knowledge.
• Native Americans transformed their land so completely that Europeans arrived in a hemisphere already massively “landscaped” by human beings.

Mann sheds clarifying light on the methods used to arrive at these new visions of the pre-Columbian Americas and how they have affected our understanding of our history and our thinking about the environment. His book is an exciting and learned account of scientific inquiry and revelation.

Charles C. Mann is a correspondent for Science and The Atlantic Monthly, and has cowritten four previous books including Noah’s Choice: The Future of Endangered Species and The Second Creation. A three-time National Magazine Award finalist, he has won awards from the American Bar Association, the Margaret Sanger Foundation, the American Institute of Physics, and the Alfred P. Sloan Foundation, among others. His writing was selected for The Best American Science Writing 2003 and The Best American Science and Nature Writing 2003. He lives with his wife and their children in Amherst, Massachusetts.

Praise For 1491: New Revelations of the Americas Before Columbus…

“A superbly written and very important book: by far the most comprehensive synthesis I’ve ever seen of the growing body of evidence that our most deep-rooted ideas about the peopling of the Western hemisphere and the kinds of societies that had developed there by the time of European contact are fundamentally wrong. Charles C. Mann is one of those rare writers who can make scholarly concepts exciting and accessible without trivializing them. In 1491 he has integrated the latest research in many different areas with his own insights and experiences to produce a fascinating and addictively readable tour through the ‘New World’ before its ‘discovery.’ His book is, above all, a wonderful, unsentimental act of restitution–challenging centuries of cultural contempt and willful blindness to show just how vigorous, various, densely populated and profoundly human the pre-Columbian Americas really were.”
–James Wilson, author of
The Earth Shall Weep: A History
of Native America

“In the tradition of Jared Diamond and John McPhee, a transforming new vision of pre-Columbian America.”
–Richard Rhodes

“Every American knows it was a vast new world that Columbus found in 1492, and most imagine it was a thinly peopled paradise of plants, animals, and hunter-gatherers waiting for civilization. The reality, Charles C. Mann tells us in his startling new book about the world before Columbus, is very different–two continents teeming with languages, cultures, and mighty cities as big, as rich, and even more populous than the capitals of Europe. But there was one thing the new world lacked–resistance to the diseases of the old. This is a lively book, filled with excitements and sorrows–a major contribution to our understanding of the achievements and the fate of the people we call Indians.”
–Tom Powers

“Charles C. Mann takes us into a complex, fascinating, and unknown world, that of the Indians who lived in this hemisphere before Columbus. He gently demolishes entrenched myths, with impressive scholarship, and with an elegance of style which that makes his book a pleasure to read as well as a marvelous education.”
–Howard Zinn

“When does American history begin? The old answer used to be 1492, with the European arrival in the Americas. That answer is no longer politically or historically correct. For the last thirty years or so historians, geographers, and archaeologists have built up an arsenal of evidence about the residents of North America after the ice receded and before the Europeans arrived. Mann has mastered that scholarship and written the most elegant synthesis of the way we were before the European invasion.”
–Joseph J. Ellis, author of
His Excellency: George Washington
or support indie stores by buying on
(This book is on backorder)
Copyright © 2020 American Booksellers Association