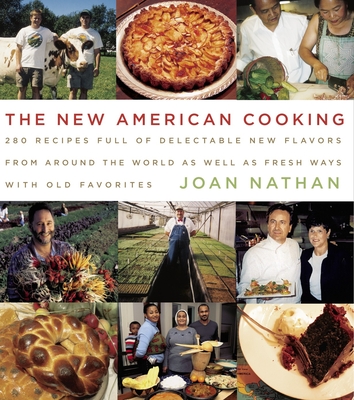 280 Recipes Full of Delectable New Flavors From Around the World as Well as Fresh Ways with Old Favorites: A Cookbook

Joan Nathan, the author of Jewish Cooking in America, An American Folklife Cookbook, and many other treasured cookbooks, now gives us a fabulous feast of new American recipes and the stories behind them that reflect the most innovative time in our culinary history.

The huge influx of peoples from all over Asia--Thailand, Vietnam, Cambodia, India--and from the Middle East and Latin America in the past forty years has brought to our kitchens new exotic flavors, little-known herbs and condiments, and novel cooking techniques that make the most of every ingredient. At the same time, health and environmental concerns have dramatically affected how and what we eat. The result: American cooking has never been as exciting as it is today. And Joan Nathan proves it on every page of this wonderfully rewarding book.

Crisscrossing the country, she talks to organic farmers, artisanal bread bakers and cheese makers, a Hmong farmer in Minnesota, a mango grower in Florida, an entrepreneur of Indian frozen foods in New Jersey, home cooks, and new-wave chefs.

Among the many enticing dishes she discovers are a breakfast huevos rancheros casserole; starters such as Ecuadorean shrimp ceviche, Szechuan dumplings, and Malaysian swordfish satays; pea soup with kaffir leaves; gazpacho with sashimi; pasta dressed with pistachio pesto; Iraqi rice-stuffed Vidalia onions; and main courses of Ecuadorean casuela, chicken yasa from Gambia, and couscous from Timbuktu (with dates and lamb). And there are desserts for every taste.

Old American favorites are featured, too, but often Nathan discovers a cook who has a new way with a dish, such as an asparagus salad with blood orange mayonnaise, pancakes made with blue cornmeal and pine nuts, a seafood chowder that includes monkfish, and a chocolate bread pudding with dried cherries.

Because every recipe has a story behind it, The New American Cooking is a book that is as much fun to read as it is to cook from--a must for every kitchen today.

Joan Nathan was born in Providence, Rhode Island. She has earned a master's degree from both the University of Michigan and Harvard University. Ms. Nathan writes for The New York Times and other publications and is the author of numerous books, including Jewish Cooking in America, which won both the James Beard Award and the IACP / Julia Child Cookbook of the Year Award in 1994. Drawing on her research for The New Cooking in America, she was the guest curator of Food Culture USA at the 2005 Smithsonian Folklife Festival. She is the mother of three grown children and lives with her husband in Washington, D.C.
Loading...
or
Not Currently Available for Direct Purchase