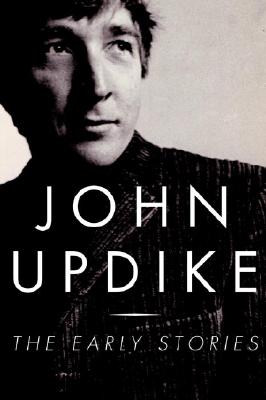 “He is a religious writer; he is a comic realist; he knows what everything feels like, how everything works. He is putting together a body of work which in substantial intelligent creation will eventually be seen as second to none in our time.”
—William H. Pritchard, The Hudson Review, reviewing Museums and Women (1972)


A harvest and not a winnowing, The Early Stories preserves almost all of the short fiction John Updike published between 1954 and 1975.

The stories are arranged in eight sections, of which the first, “Olinger Stories,” already appeared as a paperback in 1964; in its introduction, Updike described Olinger, Pennsylvania, as “a square mile of middle-class homes physically distinguished by a bend in the central avenue that compels some side streets to deviate from the grid pattern.” These eleven tales, whose heroes age from ten to over thirty but remain at heart Olinger boys, are followed by groupings titled “Out in the World,” “Married Life,” and “Family Life,” tracing a common American trajectory. Family life is disrupted by the advent of “The Two Iseults,” a bifurcation originating in another small town, Tarbox, Massachusetts, where the Puritan heritage co-exists with post-Christian morals. “Tarbox Tales” are followed by “Far Out,” a group of more or less experimental fictions on the edge of domestic space, and “The Single Life,” whose protagonists are unmarried and unmoored.

Of these one hundred three stories, eighty first appeared in The New Yorker, and the other twenty-three in journals from the enduring Atlantic Monthly and Harper’s to the defunct Big Table and Transatlantic Review. All show Mr. Updike’s wit and verbal felicity, his reverence for ordinary life, and his love of the transient world.

“Classic gems . . . These stories, like Mr. Updike’s finest novels . . . preserve a time and a place through the sorcery of words.”—The New York Times

“[Updike is] akin to Coleridge and Shelley, only with an American twist. One story at a time, he [reminds] Americans that in spite of life’s largesse, things fail; one sentence at a time, he reveals that through the small details, it can be sublime.”—The Denver Post

“Updike’s artistry—normally glimpsed in sections, like a person through window slats—is wholly and deeply seen. . . . One reads through the plenitude with delight, expectation, and at all times gratitude.”—The Atlantic Monthly

John Updike was born in 1932, in Shillington, Pennsylvania. He graduated from Harvard College in 1954, and spent a year in Oxford, England, at the Ruskin School of Drawing and Fine Art. From 1955 to 1957 he was a member of the staff of "The New Yorker, "and since 1957 has lived in Massachusetts. He is the author of fifty-odd previous books, including twenty novels and numerous collections of short stories, poems, and criticism. His fiction has won the Pulitzer Prize, the National Book Award, the American Book Award, the National Book Critics Circle Award, the Rosenthal Award, and the Howells Medal.
Loading...
or
Not Currently Available for Direct Purchase