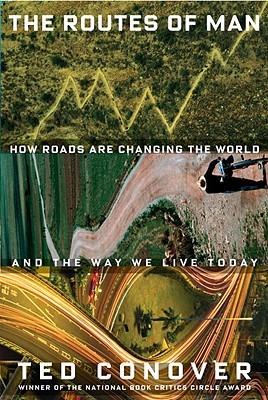 The Routes of Man

Praise For The Routes of Man: How Roads Are Changing the World and the Way We Live Today…

“The Routes of Man is an old-fashioned piece of thoughtful journalism and travel literature, the kind of book that is increasingly rare . . . meditative yet fact-filled, and with the breadth of ambition to cover a fair amount of the globe in its reporting.”
-Rick Bass, 10 Most Notable Books of 2010, The Philadelphia Inquirer

“An absorbing read . . . Conover illuminates the myriad functions of these vital but underappreciated structures—not the least of which is their symbolic importance to the human race, which is constantly on the move.”
-Edward Morris, BookPage

Ted Conoveris the author of several books including "Newjack: Guarding Sing Sing" (winner of the National Book Critics Circle Award and a finalist for the Pulitzer Prize) and "Rolling Nowhere: Riding the Rails with America's Hoboes." His writing has appeared in "The New York Times Magazine, The Atlantic Monthly, The New Yorker, " and "National Geographic." The recipient of a Guggenheim Fellowship, he is Distinguished Writer-in-Residence in the Arthur L. Carter Journalism Institute at New York University. He lives in New York City.