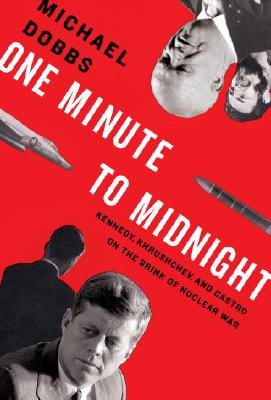 One Minute to Midnight

Kennedy, Khrushchev, and Castro on the Brink of Nuclear War

In October 1962, at the height of the Cold War, the United States and the Soviet Union appeared to be sliding inexorably toward a nuclear conflict over the placement of missiles in Cuba. Veteran Washington Post reporter Michael Dobbs has pored over previously untapped American, Soviet, and Cuban sources to produce the most authoritative book yet on the Cuban missile crisis. In his hour-by-hour chronicle of those near-fatal days, Dobbs reveals some startling new incidents that illustrate how close we came to Armageddon.

Here, for the first time, are gripping accounts of Khrushchev’s plan to destroy the U.S. naval base at Guantánamo; the accidental overflight of the Soviet Union by an American spy plane; the movement of Soviet nuclear warheads around Cuba during the tensest days of the crisis; the activities of CIA agents inside Cuba; and the crash landing of an American F-106 jet with a live nuclear weapon on board.

Dobbs takes us inside the White House and the Kremlin as Kennedy and Khrushchev—rational, intelligent men separated by an ocean of ideological suspicion—agonize over the possibility of war. He shows how these two leaders recognized the terrifying realities of the nuclear age while Castro—never swayed by conventional political considerations—demonstrated the messianic ambition of a man selected by history for a unique mission. As the story unfolds, Dobbs brings us onto the decks of American ships patrolling Cuba; inside sweltering Soviet submarines and missile units as they ready their warheads; and onto the streets of Miami, where anti-Castro exiles plot the dictator’s overthrow.

Based on exhaustive new research and told in breathtaking prose, here is a riveting account of history’s most dangerous hours, full of lessons for our time.

Praise For One Minute to Midnight: Kennedy, Khrushchev, and Castro on the Brink of Nuclear War…

"A book with sobering new information about the world's only superpower nuclear confrontation--as well as contemporary relevance . . . Filled with insights that will change the views of experts and help inform a new generation."
--Richard Holbrooke, The New York Times Book Review

“One Minute to Midnight is nothing less than a tour de force, a dramatic, nail-biting page-turner that is also an important work of scholarship. Michael Dobbs combines the skills of an experienced investigative journalist, a talented writer and an intelligent historical analyst. His research is stunning. No other history of the Cuban missile crisis matches this achievement.”
–Martin Sherwin, coauthor of American Prometheus

"Is there anything new left to be said about the 1962 missile crisis? As it turns out, there is. This book puts forward the first reports I've seen of Soviet-Cuban plans to wipe out the Guantanamo Naval Base. That an American U-2 strayed over the Soviet Union during the crisis has been known all along, but Dobbs gives us the first full account of what happened. There were so many inadvertent steps and so many miscalculations involved in the crisis that we were lucky to come through it with the world in one piece."
--Wayne Smith, Director of the Cuban Program, Center for International Policy

"Did we need another book on the Cuban Missile Crisis of 1962?  Anyone reading One Minute to Midnight will quickly realize that we did need another — and that this is it. This is unquestionably the most complete and accurate account of the crisis that we have, and will no doubt long remain so. Michael Dobbs has managed to combine the careful and thorough research of a scholar into the ability of an able journalist to bring his findings to life in a dramatic story that illuminates the historical events it examines with lively characterization of the people who made up the cast of the drama. It is first rate great history and a great read!"
--Ambassador Raymond Garthoff, former intelligence analyst and author of Reflections on the Cuban Missile Crisis

"At a time of danger for a nation it is important for political leaders first to think, then to think more and try avoid shooting. This book gives a day by day perspective on how two world leaders, John Kennedy and Nikita Khrushchev, showed their ability to manage a crisis. Thanks to them, humanity survived and we are able to read this book."
–Sergei Khrushchev

“Dobbs’s hour-to-hour chronology of those tormenting days when the world stood on the verge of nuclear holocaust is riveting. To enhance his knowledge of these events and installations, he studied the photographs taken during the crisis; Dobbs is the first historian to use these important images.”
--Dino Brugioni, author of Eyeball to Eyeball

"A vivid account of just how close to the brink the world truly came . . . A welcome introduction to that perilous time."
--Kirkus

"Dobbs presents new and often startling information that again confirms that the 'thirteen days in October' brought the world to the edge of an unprecedented cataclysm."--Booklist

"First-rate . . . Even those who think they know everything about this event will learn new stories and gain further insight into the thinking of the major participants."
--Library Journal

"Extraordinary . . . As gripping as any fiction. Dobbs is an impeccable researcher and reporter."
--Carlo Wolff, The Christian Science Monitor

Michael Dobbs was born in Belfast, Ireland, and educated at the University of York, with fellowships at Princeton and Harvard. He is a reporter for "The Washington Post, " where he spent much of his career as a foreign correspondent covering the collapse of communism. His "Down with Big Brother: The Fall of the Soviet Empire" was a finalist for a 1997 PEN award. He lives in Bethesda, Maryland.
Loading...
or
Not Currently Available for Direct Purchase