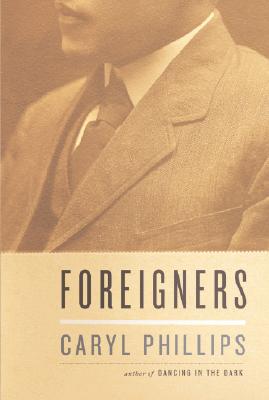 A powerful and affecting new book from Caryl Phillips: a brilliant hybrid of reportage, fiction, and historical fact that tells the stories of three black men whose lives speak resoundingly to the place and role of the foreigner in English society.

Francis Barber, “given” to the great eighteenth-century writer Samuel Johnson, more companion than servant, afforded an unusual depth of freedom that, after Johnson’s death, hastened his wretched demise . . . Randolph Turpin, who made history in 1951 by defeating Sugar Ray Robinson, becoming Britain’s first black world-champion boxer, a top-class fighter for twelve years whose life ended in debt and despair . . . David Oluwale, a Nigerian stowaway who arrived in Leeds in 1949, the events of whose life called into question the reality of English justice, and whose death at the hands of police in 1969 served as a wake-up call for the entire nation.

Each of these men’s stories is rendered in a different, perfectly realized voice. Each illuminates the complexity and drama that lie behind the simple notions of haplessness that have been used to explain the tragedy of these lives. And each explores, in entirely new ways, the themes—at once timeless and urgent—that have been at the heart of all of Caryl Phillips’s remarkable work: belonging, identity, and race.

“Ever since the first of his books, Phillips has been trying, with unusual seriousness and concentration, to rewrite English literature by filling in the gaps, the black holes, in the country’s official story of itself . . . The stories he chooses to share speak for thousands of other lives that are, and always will be, untold . . . Powerful.”
–Pico Iyer, Time

“Inspired . . . Phillips once again demonstrates why he remains one of Britain’s pre-eminent writers, ranking alongside Richard Wright, William Faulkner, James Baldwin . . . Phillips is perhaps the perfect candidate to address what has become one of his favourite themes–identity . . . He masterfully illustrates the complexity of successfully existing as ‘other’ within a majority culture determined to remain unaffected by the presence of difference . . . Disconcertingly resonant.”
–The Guardian (UK)

“In each of his somberly beautiful and lacerating books, Phillips, a virtuoso, prizewinning novelist with a biographer's avidity for fact, tells the stories of individuals caught up in the African diaspora, and ponders the question of how one retains a sense of self under the annihilating onslaught of racism . . . Phillips’s brilliantly realized and indelible novel of remembrance poses an unspoken yet inevitable question, have things changed for ‘foreigners’ of color?”
–Booklist (starred)

“With great empathy, and through a collage of voices, Phillips has created three distinct portraits. All are superbly crafted and utterly absorbing . . . As Phillips suggests, Englishness, like foreignness, is a complex and changeable thing. An important and sobering book, highly relevant today.”
–Daily Mail (UK)

Caryl Phillips was born in St. Kitts, West Indies, and brought up in England. He is also the author of three books of nonfiction and eight novels. His most recent book, "Dancing in the Dark, "won the 2006 PEN/Beyond Margins Award; "A Distant Shore" won the 2004 Commonwealth Prize. His other awards include the Martin Luther King Memorial Prize, a Guggenheim Fellowship, and the James Tait Black Memorial Prize. He is a Fellow of the Royal Society of Literature and currently lives in New York City.
Loading...
or
Not Currently Available for Direct Purchase