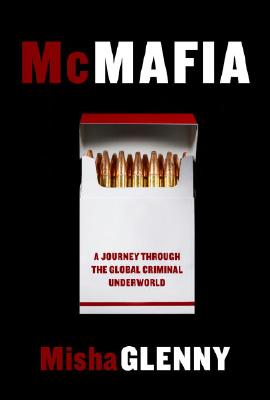 A Journey Through the Global Criminal Underworld

With the collapse of the Soviet Union, the fall of the Berlin Wall, and the deregulation of international financial markets in 1989, governments and entrepreneurs alike became intoxicated by forecasts of limitless expansion into newly open markets. No one would foresee that the greatest success story to arise from these events would be the globalization of organized crime. Current estimates suggest that illegal trade accounts for nearly one-fifth of global GDP.

McMafia is a fearless, encompassing, wholly authoritative investigation of the now proven ability of organized crime worldwide to find and service markets driven by a seemingly insatiable demand for illegal wares. Whether discussing the Russian mafia, Colombian drug cartels, or Chinese labor smugglers, Misha Glenny makes clear how organized crime feeds off the poverty of the developing world, how it exploits new technology in the forms of cybercrime and identity theft, and how both global crime and terror are fueled by an identical source: the triumphant material affluence of the West.

To trace the disparate strands of this hydra-like story, Glenny talked to police, victims, politicians, and members of the global underworld in eastern Europe, North and South America, Africa, the Middle East, China, Japan, and India. The story of organized crime’s phenomenal, often shocking growth is truly the central political story of our time. McMafia will change the way we look at the world.

Praise For McMafia: A Journey Through the Global Criminal Underworld…

“A terrifying tour of the violent underworld of globalized crime.”
–New York Post

“Besides demonstrating Glenny's courage, his book exhibits at least two other characteristics of special importance: First, he provides insightful sociological perspectives about why certain nations spawn especially widespread and virulent organized crime networks. Second, he explains how policies in certain nations (mainly, but not exclusively, the United States) generate unanticipated ripple effects in the structures of other nations' criminal underworlds…Searing.”
–The Seattle Times

“A bravura piece of globe-trotting reportage, "McMafia" traces the origins and maps the reach of every major known transnational criminal network operating in the 21st century . . . engrossing.”
–San Franciso Chronicle

“Immensely informative and more than slightly scary.”
–The Washington Post

“A vividly recounted journey through a dozen of the world's most potent gangs, cartels and transnational mafias.”
–The Wall Street Journal

For anyone who wants to understand the 21st century, this illuminating and page-turning book is essential reading.
–Emma Thompson

“‘Behind every great fortune,’ said Balzac, ‘there lies a great crime.’ Misha Glenny has updated this aperçu for our own time.”
–Christopher Hitchens, author of God is Not Great

“A riveting and chilling journey . . . Readers yearning for a deeper understanding of the real-life, international counterparts to The Sopranos need look no further than Glenny's engrossing study.”
–Publishers Weekly

“In this well-researched and riveting account, Glenny does for crime what he did for the Balkans. He dissects the international criminal organizations that run much of the world’s economy and explains how the criminal underworld has both benefited from and contributed to globalization.”
–Joseph Stiglitz, author of Making Globalization Work