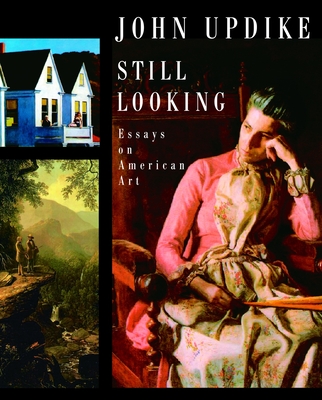 When, in 1989, a collection of John Updike’s writings on art appeared under the title Just Looking, a reviewer in the San Francisco Chronicle commented, “He refreshes for us the sense of prose opportunity that makes art a sustaining subject to people who write about it.” In the sixteen years since Just Looking was published, he has continued to serve as an art critic, mostly for The New York Review of Books, and from fifty or so articles has selected, for this richly illustrated book, eighteen that deal with American art.

After beginning with early American portraits, landscapes, and the transatlantic career of John Singleton Copley, Still Looking then considers the curious case of Martin Johnson Heade and extols two late-nineteenth-century masters, Winslow Homer and Thomas Eakins. Next, it discusses the eccentric pre-moderns James McNeill Whistler and Albert Pinkham Ryder, the competing American Impressionists and Realists in the early twentieth century, and such now-historic avant-garde figures as Alfred Stieglitz, Marsden Hartley, Arthur Dove, and Elie Nadelman. Two appreciations of Edward Hopper and appraisals of Jackson Pollock and Andy Warhol round out the volume.

America speaks through its artists. As Updike states in his introduction, “The dots can be connected from Copley to Pollock: the same tense engagement with materials, the same demand for a morality of representation, can be discerned in both.”

“Some of these essays are marvelous examples of critical explanation, in which the psychological concerns of the novelist drive the eye from work to work in an exhibition until a deep understanding of the art emerges.”
—Arthur Danto, The New York Times Book Review

“These are remarkably elegant little essays, dense in thought and perception but offhandedly casual in style. Their brevity makes more acute the sense of regret one feels to see them end.” —Jeremy Strick, Newsday

John Updike was born in 1932, in Shillington, Pennsylvania. He graduated from Harvard College in 1954 and spent a year in Oxford, England, at the Ruskin School of Drawing and Fine Art. From 1955 to 1957 he was a member of the staff of The New Yorker and since 1957 has lived in Massachusetts. He is the author of more than fifty books, including collections of short stories, poems, and criticism. His novels have won the Pulitzer Prize, the National Book Award, the National Book Critics Circle Award, and the Howells Medal.
or
Not Currently Available for Direct Purchase
Copyright © 2020 American Booksellers Association