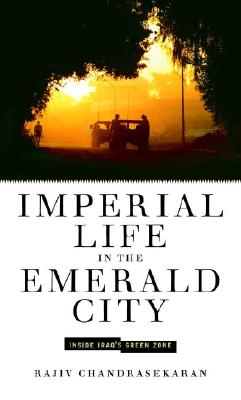 Imperial Life in the Emerald City

An unprecedented account of life in Baghdad's Green Zone, a walled-off enclave of towering plants, posh villas, and sparkling swimming pools that was the headquarters for the American occupation of Iraq.
"The Washington Post"'s former Baghdad bureau chief Rajiv Chandrasekaran takes us with him into the Zone: into a bubble, cut off from wartime realities, where the task of reconstructing a devastated nation competed with the distractions of a Little America a half-dozen bars stocked with cold beer, a disco where women showed up in hot pants, a movie theater that screened shoot- em-up films, an all-you-could-eat buffet piled high with pork, a shopping mall that sold pornographic movies, a parking lot filled with shiny new SUVs, and a snappy dry-cleaning service much of it run by Halliburton. Most Iraqis were barred from entering the Emerald City for fear they would blow it up.
Drawing on hundreds of interviews and internal documents, Chandrasekaran tells the story of the people and ideas that inhabited the Green Zone during the occupation, from the imperial viceroy L. Paul Bremer III to the fleet of twentysomethings hired to implement the idea that Americans could build a Jeffersonian democracy in an embattled Middle Eastern country.
In the vacuum of postwar planning, Bremer ignores what Iraqis tell him they want or need and instead pursues irrelevant neoconservative solutions a flat tax, a sell-off of Iraqi government assets, and an end to food rationing. His underlings spend their days drawing up pie-in-the-sky policies, among them a new traffic code and a law protecting microchip designs, instead of rebuilding looted buildings and restoring electricity production. His almost comic initiatives anger the locals and help fuel the insurgency.
Chandrasekaran details Bernard Kerik's ludicrous attempt to train the Iraqi police and brings to light lesser known but typical travesties: the case of the twenty-four-year-old who had never worked in finance put in charge of reestablishing Baghdad's stock exchange; a contractor with no previous experience paid millions to guard a closed airport; a State Department employee forced to bribe Americans to enlist their help in preventing Iraqi weapons scientists from defecting to Iran; Americans willing to serve in Iraq screened by White House officials for their views on "Roe v. Wade; "people" "with prior expertise in the Middle East excluded in favor of lesser-qualified Republican Party loyalists. Finally, he describes Bremer's ignominious departure in 2004, fleeing secretly in a helicopter two days ahead of schedule.
This is a startling portrait of an Oz-like place where a vital aspect of our government's folly in Iraq played out. It is a book certain to be talked about for years to come.


Praise For Imperial Life in the Emerald City: Inside Iraq's Green Zone…

“Extraordinary . . . Indispensable . . . Full of jaw-dropping tales of the myriad large and small ways in which Bremer and his team poured fuel into the lethal cauldron that is today’s Iraq . . . [Chandrasekaran ] has a keen eye for the small detail that illuminates larger truths . . . [he] documents the way that an avalanche of unjustifiable mistakes transforms a difficult mission into an impossible one . . . Chandrasekaran does not set out to score partisan points or unveil large geopolitical lessons; he is, essentially, a reporter telling readers what he saw. Yet it is impossible to read his book without thinking about the larger implications of the story he tells.”
-Moisés Naím, The Washington Post Book World

“Mr. Chandrasekaran’s book, while nonfiction, is as chilling an indictment of America’s tragic cultural myopia as Graham Greene’s prescient 1955 novel of the American debacle in Indochina, “The Quiet American.”
-Frank Rich, The New York Times Op-Ed

“Chandrasekaran’s detail-rich reporting and firsthand, candid narrative is what sets his contribution apart [from other books about the Iraq war] and bolsters his withering assessment . . . Using nearly two years of reporting in the country for the Washington Post and an impeccable eye for the tragic and outrageous, Chandrasekaran unveils the occupation authority compound as a Middle East Oz, grossly out of touch with the harsh realities of the real Iraq . . . The book is an eye-opening tour of ineptitude, misdirection and perils of democracy-building”
-Andrew Metz, Newsday

“With acuity and a fine sense of the absurd, the author peels back the roof to reveal an ant heap of arrogance, ineptitude, and hayseed provincialism”
-Amanda Heller, Boston Globe

“A devastating indictment of the post-invasion failures of the Bush administration.”
- Jay Freeman, Booklist

“In Imperial Life in the Emerald City [Chandrasekaran] draws a vividly detailed portrait of the Green Zone and the Coalition Provisional Authority (which ran Iraq’s government from April 2003 to June 2004) that becomes a metaphor for the administration’s larger failings in Iraq . . . His book gives the reader a visceral–sometimes sickening–picture of how the administration and its handpicked crew bungled the first year in postwar Iraq, showing how decisions made in that period contributed to a burgeoning insurgency and growing ethnic and religious strife . . . The picture Mr. Chandrasekaran draws in these pages often reads like something out of Catch-22 or from MASH.”
- Michiko Kakutani, The New York Times


“Extraordinary . . . Indispensable . . . Full of jaw-dropping tales of the myriad large and small ways in which Bremer and his team poured fuel into the lethal cauldron that is today’s Iraq . . . [Chandrasekaran ] has a keen eye for the small detail that illuminates larger truths . . . [he] documents the way that an avalanche of unjustifiable mistakes transforms a difficult mission into an impossible one . . . Chandrasekaran does not set out to score partisan points or unveil large geopolitical lessons; he is, essentially, a reporter telling readers what he saw. Yet it is impossible to read his book without thinking about the larger implications of the story he tells.”
-Moisés Naím, The Washington Post Book World


“This is a devastating account of the American occupation of Iraq. It shows how Americans arrived in Iraq full of big plans (and/or lucrative contracts) to help the country become more like the United States, but wound up living an isolated existence while the lives of Iraqis deteriorated around them. No other book has described so well what Iraq looked like and felt like in the aftermath of the invasion.”
–James Mann, author of Rise of the Vulcans

“Rajiv Chandrasekaran has not given us “another Iraq book.” He has given us a riveting tale of American misadventure. . . . He shows us American idealism and voyeurism, as well as the deadly results of American hubris. And by giving us the first full picture from inside the Green Zone, he depicts a mission doomed to failure before it had even been launched.”
–Samantha Power, author of A Problem from Hell: America and the Age of Genocide

“This is a dazzling, important, and entertaining work of reportage about the American civilians who tried to remake Iraq, and about the strange, isolated city-state in Baghdad where they failed. Every American who wants to understand how and why things went so badly wrong in Iraq should read this book.”
–Steve Coll, author of Ghost Wars

“This amazing book pulls back the curtains of deception and reveals in stunning fashion what really went on inside the Emerald City in the crucial year after the military overthrow of Saddam Hussein. Chandrasekaran’s reporting is vivid and relentless as he documents the mix of idealism, confidence, energy, hubris, political miscalculation, cultural blindness, and fantastical thinking of those who came to save Iraq yet made a difficult situation worse.”
–David Maraniss, author of They Marched Into Sunlight

“An extraordinarily vivid and compelling anatomy of a fiasco. Imperial Life in the Emerald City is an indispensable saga of how the American liberation of Iraq turned to chaos, calamity, and civil war. Chandrasekaran takes us inside Baghdad’s Green Zone as no one else has.”
–Rick Atkinson, author of The Long Gray Line

Rajiv Chandrasekaran is an assistant managing editor of "The Washington Post, "where he has worked since 1994. He previously served the "Post "as a bureau chief in Baghdad, Cairo, and Southeast Asia, and as a correspondent covering the war in Afghanistan. He recently completed a term as journalist-in-residence at the International Reporting Project at the Johns Hopkins School for Advanced International Studies, and was a public policy scholar at the Woodrow Wilson International Center. He lives in Washington, D.C.
Loading...
or
Not Currently Available for Direct Purchase