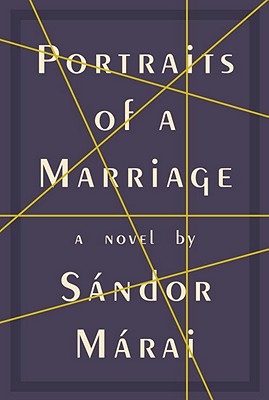 Portraits of a Marriage

A rediscovered masterwork from the famed Hungarian novelist Sándor Márai, Portraits of a Marriage is in fact a startling exploration of a triangle of entanglement.

A wealthy couple in bourgeois society, Peter and Ilonka appear to enjoy a fine union. Their home is tastefully decorated; their clothes are well tailored; they move in important circles. And yet, to hypersensitive Ilonka, her choice in décor is never good enough, and her looks are never fair enough to fully win the love of her husband, who has carried with him a secret that has long tormented him: Peter is in love with Judit, a peasant and servant in his childhood home. For Judit, however, even Peter’s affection cannot transcend that which she loves most—the prospect of her own freedom and a future without the constraints of the society that has ensnared all three in a vortex of love and loss.

Set against the backdrop of Hungary between the wars, Portraits of a Marriage offers further “posthumous evidence of [Márai’s] neglected brilliance” (Chicago Tribune) and his exquisite, acutely observed evocations of sacrifice and longing.

Praise For Portraits of a Marriage…

"Portraits of a Marriage...is brilliant in the acuity of its observations, its unremitting intelligence...Marai gives voice to a vanished world in a chorus that is both eulogy and manifesto." —The New York Times Book Review

"Deeply satisfying...I wonder why I had never read him before." —Michael Korda, The Daily Beast

"This autopsy of a failed marriage shows a virtuosic control of character and tone meaningfully set against the ossification of the fin de siècle Austro-Hungarian empire. . . What emerges is a cubist portrait of a harsh love and a dying society, elegantly paced and delightfully contradictory. . . With each new voice [Márai] builds suspense and reveals new layers and twists to this tale. Suffused with nostalgia and regret, the book evokes and examines both the nature of longing and the decline of a great empire."
—PW (starred review)

Sandor Marai was born in Kassa, in the Austro-Hungarian Empire, in 1900, and died in San Diego, California, in 1989. He rose to fame as one of the leading literary novelists in Hungary in the 1930s. Profoundly antifascist, he survived the war, but persecution by the Communists drove him from the country in 1948, first to Italy, then to the United States.
Loading...
or
Not Currently Available for Direct Purchase