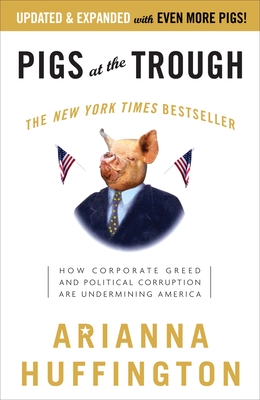 Pigs at the Trough

How Corporate Greed and Political Corruption Are Undermining America

Who filled the trough? Who set the table at the banquet of greed? How has it been possible for corporate pigs to gorge themselves on grossly inflated pay packages and heaping helpings of stock options while the average American struggles to make do with their leftovers?

Provocative political commentator Arianna Huffington yanks back the curtain on the unholy alliance of CEOs, politicians, lobbyists, and Wall Street bankers who have shown a brutal disregard for those in the office cubicles and on the factory floors. As she puts it:

“The economic game is not supposed to be rigged like some shady ring toss on a carnival midway.” Yet it has been, allowing corporate crooks to bilk the public out of trillions of dollars, magically making our pensions and 401(k)s disappear and walking away with astronomical payouts and absurdly lavish perks-for-life.

The media have put their fingers on pieces of the sordid puzzle, but Pigs at the Trough presents the whole ugly picture of what’s really going on for the first time—a blistering, wickedly witty portrait of exactly how and why the worst and the greediest are running American business and government into the ground.

Tyco’s Dennis Kozlowski, Adelphia’s John Rigas, and the Three Horsemen of the Enron Apocalypse—Ken Lay, Jeff Skilling, and Andrew Fastow—are not just a few bad apples. They are manifestations of a megatrend in corporate leadership—the rise of a callous and avaricious mind-set that is wildly out of whack with the core values of the average American. WorldCom, Enron, Adelphia, Tyco, AOL, Xerox, Merrill Lynch, and the other scandals are only the tip of the tip of the corruption iceberg.

Making the case that our public watchdogs have become little more than obedient lapdogs, unwilling to bite the corporate hand that feeds them, Arianna Huffington turns the spotlight on the tough reforms we must demand from Washington. We need, she argues, to go way beyond the lame Corporate Responsibility Act if we are to stop the voracious corporate predators from eating away at the very foundations of our democracy.

Devastatingly funny and powerfully indicting, Pigs at the Trough is a rousing call to arms and a must-read for all those who are outraged by the scandalous state of corporate America.

Praise For Pigs at the Trough: How Corporate Greed and Political Corruption Are Undermining America…

“With a passion for the truth and an eye for detail, Arianna Huffington reports on the hijacking of democracy. Read it and weep—then head for the barricades. We have work to do.”
—Bill Moyers

“A rousing call to action against special interests that have all too often triumphed over the national interest. As only she can, Arianna Huffington breathes energy and passion into the reform agenda. A withering, breathtaking, quintessentially controversial book that will inspire, inflame, and educate.”
—Senator John McCain

“Arianna Huffington has always been willing to speak and write with conviction about the world around her. Her sharp wit and thoughtful commentary help put issues on the agenda ignored by conventional thinkers. I’m certain, that with her powerful new book, Arianna Huffington will be stirring the waters for some time to come.”
—Senator John Kerry

“Arianna Huffington’s project in this wonderfully scathing, wonderfully researched, wonderfully readable book is to rescue capitalism from the CEOs. Every player in the recent go-go market owes it to himself or herself to read Pigs at the Trough and agitate for the reforms that might yet save the system. ”
—Arthur Schlesinger, Jr.

“Pigs at the Trough is a great read, hilarious and horrifying. Arianna Huffington is a world-class wit who makes a Fortune 500 trip to the woodshed seem like flirting.”
—Aaron Sorkin

“Arianna Huffington has written the most entertaining tour guide to hell since Virgil led Dante through the Inferno. Crooked CEOs beware!”
—Bill Maher

“Wonderfully incendiary and right-headed . . .Huffington is mad as hell, and rightly so.”
—Esquire

“Arianna Huffington makes an appealing and compelling argument for the repeal of human nature–that part of it that indulges savage, unconscionable, and despicable greed.”
—Walter Cronkite

Arianna Huffington, a member of Oprah's SuperSoul 100, is the author of nine books, including How to Overthrow the Government. She holds a master’s degree in economics from Cambridge University. Her syndicated column appears in newspapers across the country, including the Los Angeles Times, the New York Daily News, the Boston Herald, and the Dallas Morning News. She is also co-host of “Left, Right & Center,” public radio’s popular political roundtable program. She lives in Los Angeles with her two daughters.
Loading...
or
Not Currently Available for Direct Purchase