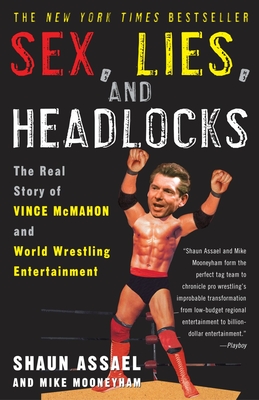 The Real Story of Vince McMahon and World Wrestling Entertainment

“Current fans and recovering Hulkamaniacs alike should find [Sex, Lies, and Headlocks] as gripping as the Camel Clutch.” —Maxim

Sex, Lies, and Headlocks is the ultimate behind-the-scenes look at the backstabbing, scandals, and high-stakes gambles that have made wrestling an enduring television phenomenon. The man behind it all is Vince McMahon, a ruthless and entertaining visionary whose professional antics make some of the flamboyant characters in the ring look tame by comparison. Throughout the book, the authors trace McMahon’s rise to power and examine the appeal of the industry’s biggest stars—including Ed “Strangler” Lewis, Gorgeous George, Bruno Sammartino, Ric Flair, and, most recently, Stone Cold Steve Austin and The Rock. In doing so, they show us that while WWE stock is traded to the public on Wall Street, wrestling remains a shadowy world guided by a century-old code that stresses secrecy and loyalty.

With a new afterword, this is the definitive book about the history of pro wrestling.

“Reading this excellent behind-the-scenes look at wrestling promoter McMahon . . . is almost as entertaining and shocking as watching the most extreme antics of McMahon’s comic-book style creations such as Steve Austin and The Rock.”
—Publishers Weekly

“A quintessentially American success story of a cocky opportunist defying the odds and hitting it big . . . Sparkling cultural history from an author wise enough to let the facts and personalities speak for themselves.”—Kirkus Reviews

Shaun Assael, a senior writer for ESPN: The Magazine, is the author of Wide Open: Days and Nights on the NASCAR Tour.

Mike Mooneyham, an editor with the Charleston Post and Courier, pens the longest-running wrestling column in the country.
Loading...
or
Not Currently Available for Direct Purchase