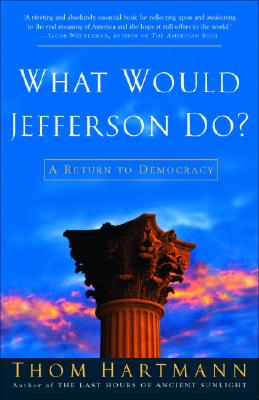 What Would Jefferson Do? (Paperback)

A Return to Democracy

Today, some 80 nations can be described as fully democratic. Yet in numerous countries around the world, democracy has failed or is tottering, and in the United States its principles are increasingly under siege from corporate and other forces.

In What Would Jefferson Do? Thom Hartmann shows why democracy is not an aberration in human history but the oldest, most resilient, and most universal form of government, with roots in nature itself. He traces the history of democracy in the United States, identifies the most prevalent myths about it, and offers an inspiring yet realistic plan for transforming the political landscape and reviving Jefferson’s dream before it is too late.

Thom Hartmann is the host of a nationally syndicated progressive daily radio show, The Thom Hartmann Program, and the award-winning author of fourteen books. He lives in Portland, Oregon.

Praise For What Would Jefferson Do?: A Return to Democracy…

“A riveting and absolutely essential book for reflecting upon and awakening to the real meaning of America and the hope it still offers to the world.” —Jacob Needleman, author of The American Soul

“In this season of witches, with the forces of unreason evidently in command, it is a joy to rediscover just how great an ally we, the people, have in Thomas Jefferson. His ideals, we find, are ours, now more than ever; and so all true patriots should turn to him again for solace, guidance, and inspiration. Kudos to Thom Hartmann for this wise and necessary book.” —Mark Crispin Miller, author of Cruel and Unusual: Bush/Cheney's New World Order

“Thom Hartmann offers us an eye-opening view of how democracy is threatened. America needs this book now more than ever before.” —Greg Palast, author of The Best Democracy Money Can Buy
or
Not Currently Available for Direct Purchase
Copyright © 2020 American Booksellers Association