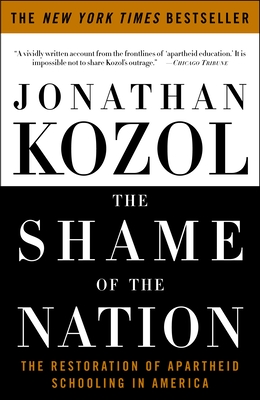 The Shame of the Nation

The Restoration of Apartheid Schooling in America

Since the early 1980s, when the federal courts began dismantling the landmark ruling in Brown v. Board of Education, segregation of black children has reverted to its highest level since 1968. In many inner-city schools, a stick-and-carrot method of behavioral control traditionally used in prisons is now used with students. Meanwhile, as high-stakes testing takes on pathological and punitive dimensions, liberal education has been increasingly replaced by culturally barren and robotic methods of instruction that would be rejected out of hand by schools that serve the mainstream of society.

Filled with the passionate voices of children, principals, and teachers, and some of the most revered leaders in the black community, The Shame of the Nation pays tribute to those undefeated educators who persist against the odds, but directly challenges the chilling practices now being forced upon our urban systems. In their place, Kozol offers a humane, dramatic challenge to our nation to fulfill at last the promise made some 50 years ago to all our youngest citizens.

Praise For The Shame of the Nation: The Restoration of Apartheid Schooling in America…

“A call for activism, The Shame of the Nation firmly grounds school-reform issues in the thorny context of race and concludes that the nation has failed to deliver the promise of Brown.” —Washington Post

“A vividly written account from the frontlines of ‘apartheid education.’ It is impossible not to share Kozol’s outrage.” —Chicago Tribune

“Segregation is back, and only a writer of Jonathan Kozol’s wisdom and passion can assess its terrible price, one child at a time. It isn’t easy, but before we can craft a solution, we have to feel the shame.” —Barbara Ehrenreich, author of Nickel and Dimed

“Shines a spotlight on poor, minority children, sabotaged and isolated by an educational system tilted to slight them . . . His outrage ought to infect us.” —Los Angeles Times

“The Shame of the Nation is a national wake-up call about what is happening to our children on our watch in schools across the country. It should be required reading.”
–Marian Wright Edelman, CEO and Founder, Children’s Defense Fund

“A powerful, morally enraged polemic in which [Kozol] argues that we have failed to deliver the promise of Brown v. Board of Education…We know that more funding and more integration would help poor African-American children, and we are not doing anything about it. That is indeed shameful. It is inspiring that afer all these decades, Kozol is still angry about these inequalities, and eloquently so. His book will make you fighting mad, and it should.” –Newsday

“The Shame of the Nation urges national action, including major funding increases and access to preschool. It’s hard to imagine anyone better qualified than Kozol to press the case. Still, that Kozol has to tell the story of educational segregation and resegregation again and again, that he so often seems alone in doing so, and that so little progress is made—that is truly a shame of our nation.” –Columbia Journalism Review

“Alive with the compelling voices of students and educators Kozol has come to know in countless visits to inner-city schools—voices many of us otherwise would not hear…His glimpses inside America’s second-class schools tell the story that numbers can’t.” –The Christian Science Monitor

“Jonathan Kozol has been a voice in the wilderness for poor children in the United States. Now, in his most powerful book, he returns to the nation’s dirty little secret of resegregation of the public schools and the erosion of Brown v. Board of Education. He is our nation’s conscience on issues of race, poverty, and children.” –Theodore M. Shaw, director-counsel and President, NAACP Legal Defense and Educational Fund, Inc.

“A real cry from the heart. Everybody who cares about children, about democracy, about citizenship, and about America’s future must read this book.” –Roger Wilkins, Pulitzer Prize-winning author and professor, George Mason University

“A gripping narrative of children’s lives within our nation’s rapidly resegregating schools…A prophetic work that sears our conscience for the high ideals of racial justice we have all too willingly betrayed.” –Rabbi David Saperstein, director, Religious Action Center of Reform Judaism

“This book will make your blood boil. I found myself reading whole pages aloud to anyone I could.” –O, the Oprah Magazine

“Shame on all of us to let this happen to our children and praise to Jonathan Kozol for telling us yet again of our gross failure to provide for our children the education they deserve.” –John Hope Franklin, James B. Duke Professor of History Emeritus, Duke University

Jonathan Kozol is the National Book Award–winning author of Death at an Early Age, Rachel and Her Children, Savage Inequalities, and Amazing Grace. He has been working with children in inner-city schools for more than 40 years.
Loading...
or support indie stores by buying on