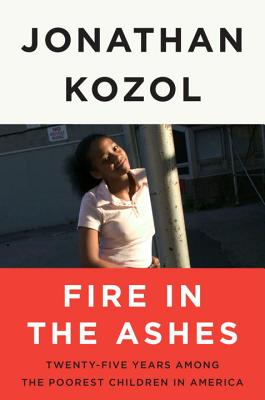 Fire in the Ashes (Hardcover)

Twenty-Five Years Among the Poorest Children in America

In this powerful and culminating work about a group of inner-city children he has known for many years, Jonathan Kozol returns to the scene of his prize-winning books Rachel and Her Children and Amazing Grace, and to the children he has vividly portrayed, to share with us their fascinating journeys and unexpected victories as they grow into adulthood.
For nearly fifty years Jonathan has pricked the conscience of his readers by laying bare the savage inequalities inflicted upon children for no reason but the accident of being born to poverty within a wealthy nation. A winner of the National Book Award, the Robert F. Kennedy Book Award, and countless other honors, he has persistently crossed the lines of class and race, first as a teacher, then as the author of tender and heart-breaking books about the children he has called the outcasts of our nation's ingenuity. But Jonathan is not a distant and detached reporter. His own life has been radically transformed by the children who have trusted and befriended him.
Never has this intimate acquaintance with his subjects been more apparent, or more stirring, than in Fire in the Ashes, as Jonathan tells the stories of young men and women who have come of age in one of the most destitute communities of the United States. Some of them never do recover from the battering they undergo in their early years, but many more battle back with fierce and, often, jubilant determination to overcome the formidable obstacles they face. As we watch these glorious children grow into the fullness of a healthy and contributive maturity, they ignite a flame of hope, not only for themselves, but for our society.
The urgent issues that confront our urban schools a devastating race-gap, a pathological regime of obsessive testing and drilling students for exams instead of giving them the rich curriculum that excites a love of learning are interwoven through these stories. Why certain children rise above it all, graduate from high school and do well in college, while others are defeated by the time they enter adolescence, lies at the essence of this work.
Jonathan Kozol is the author of Death at an Early Age, Savage Inequalities, and other books on children and their education. He has been called today's most eloquent spokesman for America's disenfranchised. But he believes young people speak most eloquently for themselves; and in this book, so full of the vitality and spontaneity of youth, we hear their testimony.

Jonathan Kozol is the National Book Award-winning author of Savage Inequalities, Death at an Early Age, The Shame of the Nation, and Amazing Grace. He has been working with children in inner-city schools for nearly fifty years."

Praise For Fire in the Ashes: Twenty-Five Years Among the Poorest Children in America…


“Kozol’s storytelling gifts shine through: with simple anecdotes that show the soulful humor, compassion, and wisdom that kindles progress among the survivors.” – Christian Science Monitor

“Fire in the Ashes isn’t some saccharine account of how disadvantaged youth get a break and then triumph over adversity.  Instead, Kozol shows us the very real costs of putting children in bad schools….Throughout, Kozol connects with these kids and young adults on a human level, refusing to step on to some political soapbox.” – Boston Globe

“As I read Fire in the Ashes and thought about Kozol's admirably principled commitment to chronicling the lives of the urban poor, I marveled at his staying power.  His tone, too, has been consistent for almost 50 years – cool, smart, empathetic and, despite all the evidence to rebut his convictions, full of hope….Kozol's brilliant body of work shines a light not merely on the lives of the poor, but also into the dark night of the American soul.” – Portland Oregonian

“Check out this magnificent book, because I think you’ll like it.  For anyone [who] cares about his fellow human, Fire in the Ashes burns bright.” – Savannah Morning News

“Engrossing chronicle of lives blighted and redeemed....Eschewing social science jargon and deploying extraordinary powers of observation and empathy, Kozol crafts dense, novelistic character studies that reveal the interplay between individual personality and the chaos of impoverished circumstances.  Like a latter-day Dickens (but without the melodrama), he gives us another powerful indictment of America's treatment of the poor.” – Publisher's Weekly (starred)

“An engaging look at the broader social implications of ignoring poverty as well as a very personal look at individuals struggling to overcome it.”  - Booklist (starred)

“Jonathan Kozol is America’s premier chronicler of life among the children of societal neglect. And Fire in the Ashes may be his best book yet . . . . Kozol does not just write about these people; he becomes an intimate part of their lives, sharing their triumphs, defeats, and, too often, mourning their deaths . . . . If you care about the children who are the future of America, this is a book you must read.”
—Ellis Cose, author of The End of Anger and The Rage of a Privileged Class

“Despite the steep odds stacked against these children—which too many cannot overcome—this is a hopeful book thanks to those who do. The incredible resilience, grit and grace of children like Pineapple are a call to urgent action.”
—Marian Wright Edelman, President, Children’s Defense Fund

“Kozol has a knack for describing his relationships with poverty-stricken children with a sympathy that is so straightforward one cannot indulge in pity.  Fire in the Ashes is a wonderful book. I couldn’t put it down.”
—Deborah Meier, author of In Schools We Trust and The Power of Their Ideas

“Fire in the Ashes is a terrific book—powerful, insightful, and heartbreaking.”
—David Berliner, author of The Manufactured Crisis