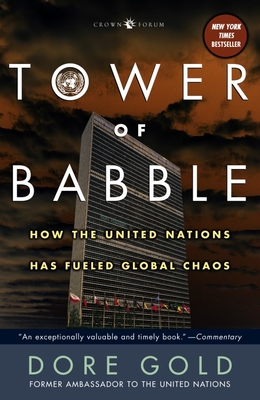 How the United Nations Has Fueled Global Chaos

A United Nations insider exposes the ugly truth about the UN—including how UN organizations have been funding terrorist groups!

In the New York Times bestseller Tower of Babble, former United Nations ambassador Dore Gold blows the lid off the UN’s shocking failures to keep international peace, its corruption, its rampant anti-Americanism, and its emboldening of terrorist organizations. Citing previously unpublished documents, a brand-new chapter exclusive to this paperback edition provides the untold story of the infamous oil-for-food scandal—including the real scandal, that the UN let oil-for-food money go to fund terrorist organizations.

Praise For Tower of Babble: How the United Nations Has Fueled Global Chaos…

“Bound to be one of the most controversial critiques in the public debate on the UN.” —Henry Kissinger, former Secretary of State

“An exceptionally valuable and timely book . . . Shocking . . . Gold brings us face to face with the reality that, even with the passing of the Soviet Union, the UN’s moral failings have not much diminished.” —Commentary

“Most conservatives, of course, realize by now that abolishing, or withdrawing from, the United Nations is never going to happen. Instead, they’re seeking to bring it to heel. The strategy is outlined by former Israeli ambassador to the UN Dore Gold in his book Tower of Babble.” —Los Angeles Times

Dore Gold, author of the New York Times bestseller Hatred’s Kingdom, served as Israel’s ambassador to the United Nations from 1997 through 1999 and has been a diplomatic envoy to numerous international leaders. Ambassador Gold, who earned his Ph.D. in international relations and Middle East studies from Columbia University, lives in Jerusalem, where he runs the Jerusalem Center for Public Affairs.
Loading...
or
Not Currently Available for Direct Purchase