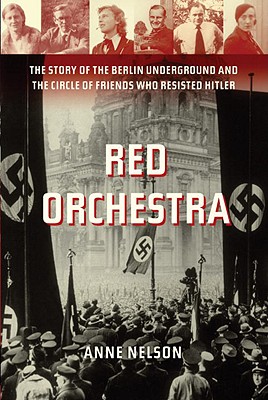 In this unforgettable book, distinguished author Anne Nelson shares one of the most shocking and inspiring–and least chronicled–stories of domestic resistance to the Nazi regime. The Rote Kapelle, or Red Orchestra, was the Gestapo’s name for an intrepid band of German artists, intellectuals, and bureaucrats (almost half of them women) who battled treacherous odds to unveil the brutal secrets of their fascist employers and oppressors.

Based on years of research, featuring new information, and culled from exclusive interviews, Red Orchestra documents this riveting story through the eyes of Greta Kuckhoff, a German working mother. Fighting for an education in 1920s Berlin but frustrated by her country’s economic instability and academic sexism, Kuckhoff ventured to America, where she immersed herself in jazz, Walt Disney movies, and the first stirrings of the New Deal. When she returned to her homeland, she watched with anguish as it descended into a totalitarian society that relegated her friends to exile and detention, an environment in which political extremism evoked an extreme response.

Greta and others in her circle were appalled by Nazi anti-Semitism and took action on many fronts to support their Jewish friends and neighbors. As the war raged and Nazi abuses grew in ferocity and reach, resistance was the only possible avenue for Greta and her compatriots. These included Arvid Harnack–the German friend she met in Wisconsin–who collected anti-Nazi intelligence while working for their Economic Ministry; Arvid’s wife, Mildred, who emigrated to her husband’s native country to become the only American woman executed by Hitler; Harro Schulze-Boysen, the glamorous Luftwaffe intelligence officer who smuggled anti-Nazi information to allies abroad; his wife, Libertas, a social butterfly who coaxed favors from an unsuspecting Göring; John Sieg, a railroad worker from Detroit who publicized Nazi atrocities from a Communist underground printing press; and Greta Kuckhoff’s husband, Adam, a theatrical colleague of Brecht’s who found employment in Goebbels’s propaganda unit in order to undermine the regime.

For many members of the Red Orchestra, these audacious acts of courage resulted in their tragic and untimely end. These unsung individuals are portrayed here with startling and sympathetic power. As suspenseful as a thriller, Red Orchestra is a brilliant account of ordinary yet bold citizens who were willing to sacrifice everything to topple the Third Reich.

Praise For Red Orchestra: The Story of the Berlin Underground and the Circle of Friends Who Resisted Hitler…

“The Red Orchestra was the great classic spy network of the 1930s and World War II. Anne Nelson’s Red Orchestra, superbly researched and sharply written, is about the real, very brave people who made up this network—who they were, what they did, and the price they paid for their resistance to tyranny in Europe’s darkest hour.”—Alan Furst, author of The Spies of Warsaw

Anne Nelson is an author and playwright, and teaches at the School of International and Public Affairs at Columbia University. She has been the recipient of numerous awards and grants, including a 2005 Guggenheim Fellowship and the 1989 Livingston Award for international reporting. Her books and articles have been published widely, and her play "The Guys" has been staged throughout the world. As a war correspondent in El Salvador and Guatemala from 1980 to 1983, Nelson published reports and photography in the "New York Times, Los Angeles Times," and many other publications. She is a graduate of Yale University and a member of the Council on Foreign Relations.
Loading...
or
Not Currently Available for Direct Purchase