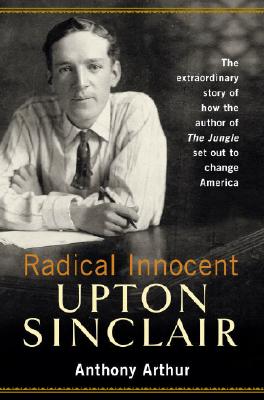 Few American writers have revealed their private as well as their public selves so fully as Upton Sinclair, and virtually none over such a long lifetime (1878—1968). Sinclair’s writing, even at its most poignant or electrifying, blurred the line between politics and art–and, indeed, his life followed a similar arc. In Radical Innocent: Upton Sinclair, Anthony Arthur weaves the strands of Sinclair’s contentious public career and his often-troubled private life into a compelling personal narrative.

An unassuming teetotaler with a fiery streak, called a propagandist by some, the most conservative of revolutionaries by others, Sinclair was such a driving force of history that one could easily mistake his life story for historical fiction. He counted dozens of epochal figures as friends or confidants, including Mark Twain, Jack London, Henry Ford, Thomas Mann, H. G. Wells, Theodore and Franklin Roosevelt, Albert Einstein, Charlie Chaplin, Albert Camus, and Carl Jung.

Starting with The Jungle in 1906, Sinclair’s fiction and nonfiction helped to inform and mold American opinions about socialism, labor and industry, religion and philosophy, the excesses of the media, American political isolation and pacifism, civil liberties, and mental and physical health.

In his later years, Sinclair twice reinvented himself, first as the Democratic candidate for governor of California in 1934, and later, in his sixties and seventies, as a historical novelist. In 1943 he won a Pulitzer Prize for Dragon’s Teeth, one of eleven novels featuring super-spy Lanny Budd.

Outside the literary realm, the ever-restless Sinclair was seemingly everywhere: forming Utopian artists’ colonies, funding and producing Sergei Eisenstein’s film documentaries, and waging consciousness-raising political campaigns. Even when he wasn’t involved in progressive causes or counterculture movements, his name often was invoked by them–an arrangement that frequently embroiled Sinclair in controversy.

Sinclair’s passion and optimistic zeal inspired America, but privately he could be a frustrated, petty man who connected better with his readers than with members of his own family. His life with his first wife, Meta, his son David, and various friends and professional acquaintances was a web of conflict and strain. Personally and professionally ambitious, Sinclair engaged in financial speculation, although his wealth-generating schemes often benefited his pet causes–and he lobbied as tirelessly for professional recognition and awards as he did for government reform. As the tenor of his work would suggest, Sinclair was supremely human.

In Radical Innocent: Upton Sinclair, Anthony Arthur offers an engrossing and enlightening account of Sinclair’s life and the country he helped to transform. Taking readers from the Reconstruction South to the rise of American power to the pinnacle of Hollywood culture to the Civil Rights era, this is historical biography at its entertaining and thought-provoking finest.

"intimate and intellectually astute."- The New Yorker
“enlightening, frequently stinging biography . . . Arthur organizes a vast amount of information into a fast-flowing, witty, and incisive narrative.” - Booklist [starred review]
“a well-researched, balanced and fascinating portrait.” - Publishers Weekly
"Neither hagiographic nor condescending, Arthur is an exemplary biographer, interested in human beings for their own sake, in all their unvarnished oddity." - The Nation

“Few authors have led as full and fascinating a career, and rare is the biographer capable of packing the fascinating fullness as compactly– and apparently completely – as Arthur has done.” – Chicago Sun Times

“…an engrossing and enlightening account of Sinclair's life and the country he helped to transform. . . historical biography at its entertaining and thought-provoking finest.” – Forbes Book Club

“The chapters in Radical Innocent that describe the research and writing of The Jungle – the most famous and still the most powerful of all the muckraking novels – are thrilling. . . .Arthur captures nicely Sinclair's almost absurd innocence, his boundless enthusiasm as he met journalists, welfare workers, labor organizers and the men and women who worked in the slaughterhouses." – Los Angeles Times

“engaging and perceptive . . . sensitive, engrossing, and even amusing exploration of Sinclair's complex private life.” - Christian Science Monitor
“graceful new biography.”- Columbia Journalism Review
It is to Arthur's credit that he can make Sinclair not only interesting yet likeable . . . Radical Innocent is not only refreshing, it's a shock to read: a biography of a survivor. . . The author has done a Herculean job of sifting through what must, literarily, have been tons of material to produce a thoroughly readable book about a complex man.- Toronto Star
“Radical Innocent is a wonderful gift . . . a vital biography of an American treasure, and Arthur proves himself as Sinclair’s vital biographer.” - American Way [American Airlines Magazine]
"Few authors have led as full and fascinating a career, and rare is the biographer capable of packing the fascinating fullness as compactly - and apparently completely - as Arthur has done." -Denver Post

"The book provides an interesting narrative on an extraordinary American life. It not only offers specific details rendered from meticulous research, but also a historical context that makes it easier to understand the circumstances of the time period in which this "most conservative of revolutionaries" worked."-The Post and Courier

A former Fulbright scholar, Anthony Arthur is the author of "Literary Feuds: A Century of Celebrated Quarrels from Mark Twain to Tom Wolfe." Additionally, he has written "Deliverance at Los Banos" and "The Bushmasters," both narrative histories of World War II, and "The Tailor-King: The Rise and Fall of the Anabaptist Kingdom of Munster." A professor emeritus, Arthur retired two years ago from the English department at California State University at Northridge, where he had taught American literature since 1970. He lives in Woodland Hills, California."
Loading...
or
Not Currently Available for Direct Purchase