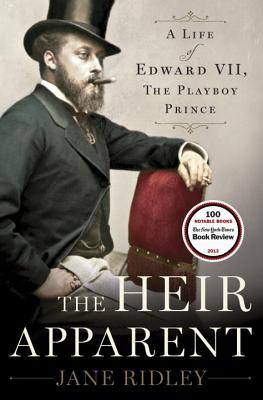 A Life of Edward VII, the Playboy Prince

NAMED ONE OF THE BEST BOOKS OF THE YEAR BY "THE NEW YORK TIMES BOOK REVIEW "AND "THE BOSTON GLOBE"
This richly entertaining biography chronicles the eventful life of Queen Victoria's firstborn son, the quintessential black sheep of Buckingham Palace, who matured into as wise and effective a monarch as Britain has ever seen. Granted unprecedented access to the royal archives, noted scholar Jane Ridley draws on numerous primary sources to paint a vivid portrait of the man and the age to which he gave his name.
Born Prince Albert Edward, and known to familiars as "Bertie," the future King Edward VII had a well-earned reputation for debauchery. A notorious gambler, glutton, and womanizer, he preferred the company of wastrels and courtesans to the dreary life of the Victorian court. His own mother considered him a lazy halfwit, temperamentally unfit to succeed her. When he ascended to the throne in 1901, at age fifty-nine, expectations were low. Yet by the time he died nine years later, he had proven himself a deft diplomat, hardworking head of state, and the architect of Britain's modern constitutional monarchy.
Jane Ridley's colorful biography rescues the man once derided as "Edward the Caresser" from the clutches of his historical detractors. Excerpts from letters and diaries shed new light on Bertie's long power struggle with Queen Victoria, illuminating one of the most emotionally fraught mother-son relationships in history. Considerable attention is paid to King Edward's campaign of personal diplomacy abroad and his valiant efforts to reform the political system at home. Separating truth from legend, Ridley also explores Bertie's relationships with the women in his life. Their ranks comprised his wife, the stunning Danish princess Alexandra, along with some of the great beauties of the era: the actress Lillie Langtry, longtime "royal mistress" Alice Keppel (the great-grandmother of Camilla Parker Bowles), and Lady Randolph Churchill, mother of Winston.
Edward VII waited nearly six decades for his chance to rule, then did so with considerable panache and aplomb. A magnificent life of an unexpectedly impressive king, "The Heir Apparent" documents the remarkable transformation of a man--and a monarchy--at the dawn of a new century.
Praise for" The Heir Apparent"
"If "The Heir Apparent"] isn't "the "definitive life story of this fascinating figure of British history, then nothing ever will be."--"The Christian Science Monitor
"
""The Heir Apparent" is smart, it's fascinating, it's sometimes funny, it's well-documented and it reads like a novel, with Bertie so vivid he nearly leaps from the page, cigars and all."--Minneapolis "Star Tribune"
" "
"I closed "The Heir Apparent" with admiration and a kind of wry exhilaration."--"The Wall Street Journal"
"Ridley is a serious scholar and historian, who keeps Bertie's flaws and virtues in a fine balance."--"The Boston Globe"
"Brilliantly entertaining . . . a landmark royal biography."--"The Sunday Telegraph"
"Superb."--"The New York Times Book Review.


Praise For The Heir Apparent: A Life of Edward VII, the Playboy Prince…

“So often, after finishing a great slab of a biography, one feels a weary disenchantment with the project and its subject. Not in this case. I closed The Heir Apparent with admiration and a kind of wry exhilaration. If it was an overdose, it was an overdose of champagne.”—The Wall Street Journal

“If [The Heir Apparent] isn’t the definitive life story of this fascinating figure of British history, then nothing ever will be.”—The Christian Science Monitor

“Ridley is a serious scholar and historian who keeps Bertie’s flaws and virtues in fine balance.”—The Boston Globe

“The Heir Apparent is smart, it’s fascinating, it’s sometimes funny, it’s well-documented and it reads like a novel, with Bertie so vivid he nearly leaps from the page, cigars and all. From the first page, Ridley drew me into the story of (let’s face it) someone I wasn’t particularly interested in. Know an Anglophile? Buy them this book.”—Minneapolis Star Tribune

“A top-notch royal biography . . . The title of Ridley’s biography of King Edward is appropriate to the popular sense of the monarch, that his life was defined by his many years as the indulged and indulgent Prince of Wales. But significant research stands behind the author’s more judicious understanding of the man, that the ‘dissipated prince evolved into a model king.’”—Booklist (starred review)

“[A] marvelously rich biography of Edward VII . . . Readers both general and specialized will delight in Ridley’s work; it raises the bar for royal biographies to come.”—Publishers Weekly (starred review)

“A highly readable, definitive biography of Queen Victoria’s son, the ‘black sheep of Buckingham Palace,’ who matured into an effective monarch . . . [A] top-notch life of the king . . . There is no shortage of biographies of Edward VII, but this thick, lucid and lively history deserves pride of place on the shelf.”—Kirkus Reviews (starred review)

“Ridley has written a marvellous biography. Her book is racy and pacy, filled with delicious descriptions of grand Edwardian shooting parties, cutting-edge fashion and, of course, a string of beautiful society women. But she is never trivial, and nor is her Bertie.”—The Mail on Sunday

“Ridley’s definitive biography is a remarkable achievement. Entertaining, readable and illuminating, this much-anticipated reappraisal of a fascinating life is a brilliant tour de force.”—Bridlington Free Press

“Bertie, as he was universally known, couldn’t do anything without it being commented on and often distorted. Though the gossip columnists had plenty of material to work with, they only told part of the story. [Ridley] does an excellent job of redressing the balance.”—The Financial Times

Jane Ridley is professor of history at Buckingham University in England, where she teaches a course on biography. Her previous biographies include "The Young Disraeli" and "Edwin Lutyens," which won the prestigious Duff Cooper Prize. A Fellow of the Royal Society of Literature, Ridley writes book reviews for "The""Spectator" and other newspapers, and has also appeared in several television and radio documentaries.
Loading...
or
Not Currently Available for Direct Purchase