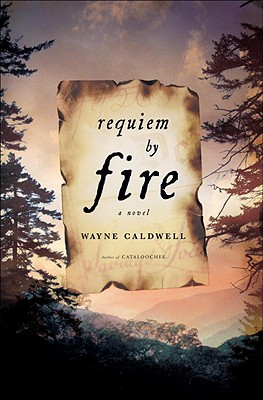 Charles Frazier called Cataloochee, Wayne Caldwell’s acclaimed debut, “a brilliant portrait of a community and a way of life long gone, a lost America.” Now, in Requiem by Fire, Caldwell returns to the same fertile Appalachian ground that provided the setting for his first novel, recalling a singular time in American history when the greater good may not have been best for everyone.

In the late 1920s, Cataloochee, North Carolina, a settlement tucked deep in the Great Smoky Mountains, is home to nearly eleven hundred souls—many of them prosperous farmers whose ancestors broke the first furrows a century earlier. Now attorney Oliver Babcock, Jr., has been given the difficult task of presenting the locals with two options: sell their land to the federal government for the creation of a national park or remain behind at their own financial peril.

While some of the area’s inhabitants seem ready to embrace a new and modern life, others, deeply embedded in their rural ways, are resistant. Silas Wright’s cantankerous unwillingness to sell or to follow the new rules leads to some knotty and often amusing predicaments. Jim Hawkins, hired by the Parks commission, has relocated his reluctant wife, Nell, and their children to Cataloochee, but Nell’s unhappiness forces Jim to make a dire choice between his roots and his family. And a sinister force is at work in the form of the deranged Willie McPeters, who threatens those who have decided to stay put.

Requiem by Fire is a moving, timeless tale of survival and change. With humor and pathos, this magnificent novel transports readers to another time and place—and celebrates Southern storytelling at its finest.

Praise For Requiem by Fire…

"Requiem by Fire sounds like truth and feels like memory. Wayne Caldwell has restored to us a lost America–and made us fall in love with its people all over again."–Jon Clinch, author of Finn

"In this remarkable novel, Wayne Caldwell has brought a forgotten world vividly back to life, giving voice to voices too long ignored. He is an Appalachian treasure, but Requiem by Fire's story of love and loss transcends regional concerns to speak to all places and all people."–Ron Rash, author of Serena

"On a tightrope between humor and heartbreak, Requiem by Fire is an uncompromising story of a doomed community, a rewarding journey into the high mountains."—John Ehle, author of The Land Breakers