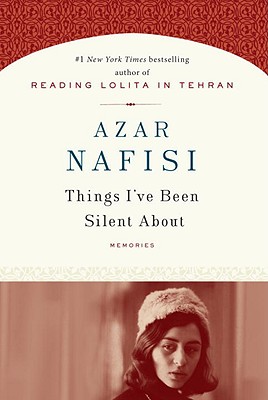 Things I've Been Silent About

Azar Nafisi, author of the beloved international bestseller Reading Lolita in Tehran, now gives us a stunning personal story of growing up in Iran, memories of her life lived in thrall to a powerful and complex mother, against the background of a country’s political revolution. A girl’s pain over family secrets; a young woman’s discovery of the power of sensuality in literature; the price a family pays for freedom in a country beset by political upheaval–these and other threads are woven together in this beautiful memoir, as a gifted storyteller once again transforms the way we see the world and “reminds us of why we read in the first place” (Newsday).


Praise For Things I've Been Silent About: Memories…

"Absorbing . . . a testament to the ways in which narrative truth-telling—from the greatest works of literature to the most intimate family stories—sustains and strengthens us.”—O: The Oprah Magazine

“A gifted storyteller with a mastery of Western literature, Nafisi knows how to use language both to settle scores and to seduce.”—New York Times Book Review

Azar Nafisi is a visiting professor and the director of the Dialogue Project at the Foreign Policy Institute of Johns Hopkins University. She has taught Western literature at the University of Tehran, the Free Islamic University, and the University of Allameh Tabatabai in Iran. In 1981 she was expelled from the University of Tehran after refusing to wear the veil. In 1994 she won a teaching fellowship from Oxford University, and in 1997 she and her family left Iran for America. She has written for "The New York Times, The Washington Post, The Wall Street Journal," and "The New Republic" and has appeared on countless radio and television programs. She lives in Washington, D.C., with her husband and two children.
Loading...
or
Not Currently Available for Direct Purchase