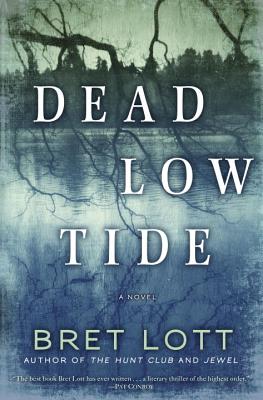 In this long-awaited sequel to The Hunt Club, set in the swampy South Carolina Lowcountry, New York Times bestselling author Bret Lott returns with a literary page-turner about murder and family secrets. Though Dead Low Tide continues the story of Huger Dillard, this haunting work of fiction brilliantly stands on its own. No longer a teenager and now a young man, Huger must come to terms with and confront the truth about his community, his past, and the mysterious place he calls home.

While most of the residents in the wealthy, historic Charleston enclave of Landgrave Hall are asleep at two-thirty in the morning, Huger Dillard and his father, “Unc,” are heading, via jonboat, to the adjoining golf course. Blinded by a terrible accident that killed his wife, Unc prefers to practice his golf game when no one is watching. But before anyone can even tee off, Huger makes a grisly find: a woman’s body, anchored deep in the mud at the water’s low tide.

The discovery sets off a chain of events that puts Huger and his family up against secret military forces, old friends, longtime neighbors, lost loves, and shadowy global networks. The only thing connecting them all is Landgrave Hall—and the treacherous reason why this area is so important to so many people.

“The best book Bret Lott has ever written—by far. He creates a Charleston that has never been written about in the history of that remarkable city. It is a literary thriller of the highest order—like something John Le Carré would write. I couldn’t put it down.”—Pat Conroy, author of South of Broad

“Dead Low Tide should be retitled High Water Mark. Bret Lott is a combination of James Lee Burke and Elmore Leonard but with the grace and poise of Pat Conroy. Not a word is out of place. Reading this book is like listening to good music—as you reach the end, you want to start all over again. Dead Low Tide has made me a Bret Lott lifer. I’m going back and reading everything he’s written, and I’ll be first in line when the next comes out.”—Ridley Pearson, author of In Harm’s Way

“Bret Lott has done it again: linked a small family drama to a matter of national importance. Though he tells his tale, as always, with a lyric sweetness, terror—both private and public—is the subject here.”—Nicholas Delbanco, author of Lastingness: The Art of Old Age

"This literary thriller of the first order grippingly deals with current events while revealing the secrets, ambitions, loves, and fears of a family that readers grow to cherish."--Library Journal

“I turned the pages so insistently that, had there been pictures on the pages instead of print, it would have made a movie. It’s that suspenseful.”—Wally Lamb

Bret Lott is the author of the novels "Ancient Highway, A Song I Knew by Heart, Jewel" (an Oprah's Book Club selection), "The Hunt Club, Reed's Beach, A Stranger's House," and "The Man Who Owned Vermont;" and the story collections "A Dream of Old Leaves, How to Get Home," and "The Difference Between Women and Men;" the memoir" Fathers, Sons, and Brothers;" and the writing guide" Before We Get Started." Formerly editor of "The Southern Review, " he was appointed to the National Council on the Arts in 2006. Bret Lott lives with his wife, Melanie, in Hanahan, South Carolina.
Loading...
or
Not Currently Available for Direct Purchase