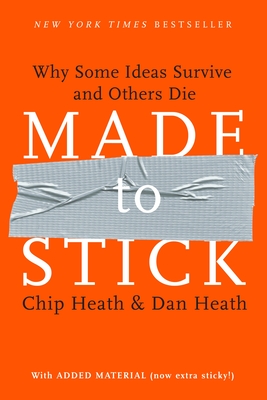 NEW YORK TIMES BESTSELLER • The instant classic about why some ideas thrive, why others die, and how to make your ideas stick.

“Anyone interested in influencing others—to buy, to vote, to learn, to diet, to give to charity or to start a revolution—can learn from this book.”—The Washington Post

Praise For Made to Stick: Why Some Ideas Survive and Others Die…

“Made to Stick summons plenty of brain science, social history, and behavioral psychology to explain what makes an idea winning and memorable—and the Heaths do the telling with beautiful clarity.”—The Christian Science Monitor

Together, Chip and Dan have written three New York Times bestselling books: Made to Stick, Switch, and Decisive. Their books have sold over two million copies worldwide and have been translated into thirty-three languages, including Thai, Arabic, and Lithuanian. Their most recent book is The Power of Moments.
Loading...
or support indie stores by buying on