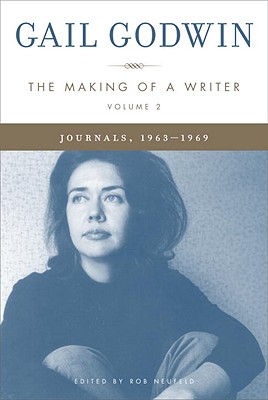 The Making of a Writer, Volume 2 (Hardcover)

“True, time is the villain and we are trapped in him. True, love is sometimes not returned. True, friends are sometimes false. But to be aware of this—all of it—and still want to go on living, that is the triumph. It is the reward.”

As a young woman and aspiring author, Gail Godwin kept a detailed journal of her hopes and dreams, her love affairs, daily struggles, and small triumphs as she yearned for the day when she would finally become a published writer. At the urging of her friend Joyce Carol Oates, Godwin has distilled these early journals into two parts: This second and final volume opens in London in 1963 and concludes with the triumphant sale of Godwin’s first novel in 1969.

Newly divorced and filled with literary ambition, Godwin arrives in London in 1962. At the start of this second volume, the call to write has become ingrained in the trajectory of her life. Though she is hobbled by a tedious but well-paying job with the U.S. Travel Service (“I thought I should no more be doing this job than raising skunks”), Godwin’s journals brim with the emotional complexity and intellectual curiosity that will soon distinguish her novels, and a sharp wit that belies her twenty-six years.

Through these pages, Godwin’s development as a writer takes center stage, bolstered by her keen observations of human relationships—especially those between men and women: “I want to exploit, define, name, place this ever-shifting contest between men and women.” Her own love affairs are varied, doomed, and fascinating: There’s a short-lived engagement to a rugby player, a dalliance with a policeman, a tortured marriage to a psychiatrist obsessed with Scientology. “Men have let me down,” she writes, “and I construct my meaning in the emptiness they’ve left behind.”

Leaving London and all its passionate wonders and disappointments, Godwin arrives in Iowa City to study at the Iowa Writers’ Workshop. There, taught by Kurt Vonnegut and José Donoso, building friendships with Jane Barnes, John Casey, David Plimpton, and John Irving, Gail Godwin finally achieves her dream—and a published novelist is born. The Making of a Writer, Volume 2 is a remarkable window into the life of one of the most notable American writers of a generation, and an extraordinarily candid look at the very heart of a woman who has written herself to acclaim.

Gail Godwin is a three-time National Book Award finalist and the bestselling author of twelve critically acclaimed novels, including "A Mother and Two Daughters, Violet Clay, Father Melancholy's Daughter, Evensong, The Good Husband, Queen of the Underworld, " and "Unfinished Desires." She is also the author of" The Making of a Writer: Journals, 1961-1963, " the first of these two volumes, edited by Rob Neufeld. She has received a Guggenheim Fellowship, National Endowment for the Arts grants for both fiction and libretto writing, and the Award in Literature from the American Academy of Arts and Letters. She has written libretti for ten musical works with the composer Robert Starer. Gail Godwin lives in Woodstock, New York.

“A generous gift from a much-loved author to her readers.”—Chicago Sun-Times

“Full of lively, entertaining observations on the literary life . . . [captures] the spirit of a young writer’s adventure into foreign lands and foreign realms of thought and creative endeavor.”—The Atlanta Journal-Constitution

“As cities and continents and men change, the entries are borne along by . . . the young Godwin’s fierce conviction that she is meant to write fiction and her desire to distract herself from this mission with any man who catches her eye.”—The New York Times Book Review