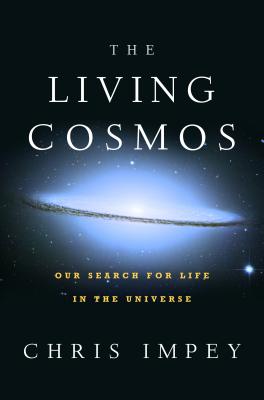 Our Search for Life in the Universe

Astrobiology–the study of life in space–is one of today’s fastest growing and most popular fields of science. In this compelling, accessible, and elegantly reasoned new book, award-winning scholar and researcher Chris Impey explores the foundations of this rapidly developing discipline, where it’s going, and what it’s likely to find.

The journey begins with the earliest steps of science, gaining traction through the revelations of the Renaissance, including Copernicus’s revolutionary declaration that the Earth was not the center of the universe but simply a planet circling the sun. But if Earth is not the only planet, it is so far the only living one that we know of. In fascinating detail, The Living Cosmos reveals the incredible proliferation and variety of life on Earth, paying special tribute to some of its hardiest life forms, extremophiles, a dizzying array of microscopic organisms compared, in Impey’s wise and humorous prose, to superheroes that can survive extreme heat and cold, live deep within rocks, or thrive in pure acid.

From there, Impey launches into space, where astrobiologists investigate the potential for life beyond our own world. Is it to be found on Mars, the “death planet” that has foiled most planetary missions, and which was wet and temperate billions of years ago? Or on Venus, Earth’s “evil twin,” where it rains sulfuric acid and whose heat could melt lead? (“Whoever named it after the goddess of love had a sorry history of relationships.”) The answer may lie in a moon within our Solar System, or it may be found in one of the hundreds of extra-solar planets that have already been located. The Living Cosmos sees beyond these explorations, and imagines space vehicles that eschew fuel for solar- or even nuclear-powered rockets, all sent by countries motivated by the millions to be made in space tourism.

But The Living Cosmos is more than just a riveting work about experiment and discovery. It is also an affecting portrait of the individuals who have devoted their lives to astrobiology. Illustrated throughout, The Living Cosmos is a revelatory book about a science that is changing our view of the universe, a mesmerizing guide to what life actually means and where it may–or may not–exist, and a stunning work that explains our past as it predicts our future.