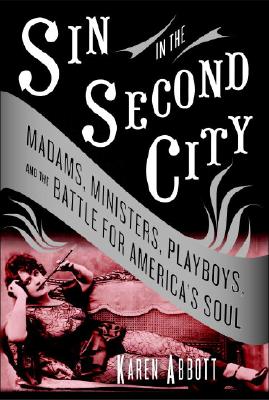 Sin in the Second City

Madams, Ministers, Playboys, and the Battle for America's Soul

Step into the perfumed parlors of the Everleigh Club, the most famous brothel in American history–and the catalyst for a culture war that rocked the nation. Operating in Chicago’s notorious Levee district at the dawn of the last century, the Club’s proprietors, two aristocratic sisters named Minna and Ada Everleigh, welcomed moguls and actors, senators and athletes, foreign dignitaries and literary icons, into their stately double mansion, where thirty stunning Everleigh “butterflies” awaited their arrival. Courtesans named Doll, Suzy Poon Tang, and Brick Top devoured raw meat to the delight of Prince Henry of Prussia and recited poetry for Theodore Dreiser. Whereas lesser madams pocketed most of a harlot’s earnings and kept a “whipper” on staff to mete out discipline, the Everleighs made sure their girls dined on gourmet food, were examined by an honest physician, and even tutored in the literature of Balzac.

Not everyone appreciated the sisters’ attempts to elevate the industry. Rival Levee madams hatched numerous schemes to ruin the Everleighs, including an attempt to frame them for the death of department store heir Marshall Field, Jr. But the sisters’ most daunting foes were the Progressive Era reformers, who sent the entire country into a frenzy with lurid tales of “white slavery”——the allegedly rampant practice of kidnapping young girls and forcing them into brothels. This furor shaped America’s sexual culture and had repercussions all the way to the White House, including the formation of the Federal Bureau of Investigation.

With a cast of characters that includes Jack Johnson, John Barrymore, John D. Rockefeller, Jr., William Howard Taft, “Hinky Dink” Kenna, and Al Capone, Sin in the Second City is Karen Abbott’s colorful, nuanced portrait of the iconic Everleigh sisters, their world-famous Club, and the perennial clash between our nation’s hedonistic impulses and Puritanical roots. Culminating in a dramatic last stand between brothel keepers and crusading reformers, Sin in the Second City offers a vivid snapshot of America’s journey from Victorian-era propriety to twentieth-century modernity.

Praise for Sin in the Second City:
“Assiduously researched… [Sin in the Second City] describes a popular culture awash in wild tales of sexual abuse, crusading reformers claiming God on their side, and deep suspicion of the threat posed by “foreigners” to the nation’s Christian values.”
——Janet Maslin, The New York Times

“Lavish in her details, nicely detached in her point of view, [and with] scrupulous concern for historical accuracy, Ms. Abbott has written an immensely readable book. Sin in the Second City offers much in the way of reflection for those interested in the unending puzzle that goes by the name of human nature." — The Wall Street Journal


"Abbott's first book is meticulously researched and entertaining... a colorful history of old Chicago that reads like a novel."
——The Atlanta Journal Constitution


“With gleaming prose and authoritative knowledge Abbott elucidates one of the most colorful periods in American history, and the result reads like the very best fiction. Sex, opulence, murder — What's not to love?”
—— Sara Gruen, author of Water for Elephants


“A detailed and intimate portrait of the Ritz of brothels, the famed Everleigh Club of turn-of-the-century Chicago. Sisters Minna and Ada attracted the elites of the world to such glamorous chambers as the Room of 1,000 Mirrors, complete with a reflective floor. And isn’t Minna’s advice to her resident prostitutes worthy advice for us all: “Give, but give interestingly and with mystery.”’
—— Erik Larson, author of The Devil in the White City


“Karen Abbott has combined bodice-ripping salaciousness with top-notch scholarship to produce a work more vivid than a Hollywood movie.”
—— Melissa Fay Greene, author of There is No Me Without You


“Sin in the Second City is a masterful history lesson, a harrowing biography, and - best of all - a superfun read. The Everleigh story closely follows the turns of American history like a little sister. I can't recommend this book loudly enough.”
—— Darin Strauss, author of Chang and Eng


“This is a story of debauchery and corruption, but it is also a story of sisterhood, and unerring devotion. Meticulously researched, and beautifully crafted, Sin in the Second City is an utterly captivating piece of history.”
—— Julian Rubinstein, author of Ballad of the Whiskey Robber

Praise For Sin in the Second City: Madams, Ministers, Playboys, and the Battle for America's Soul…

“Karen Abbott has pioneered sizzle history in this satisfyingly lurid tale. Change the hemlines, add 100 years, and the book could be filed under current affairs.” —— USA Today

“A rousingly racy yarn.” –Chicago Tribune
“A colorful history of old Chicago that reads like a novel… a compelling and eloquent story.” —— The Atlanta Journal-Constitution

“At last, a history book you can bring to the beach.” —— The Philadelphia Inquirer

“Once upon a time, Chicago had a world class bordello called The Everleigh Club. Author Karen Abbott brings the opulent place and its raunchy era alive in a book that just might become this years “The Devil In the White City.” —— Chicago Tribune Sunday Magazine (cover story)

“The book is rich with details about a fast-and-loose Chicago of the early 20th century… Sin explores this world with gusto, throwing light on a booming city and exposing its shadows.”
—— Time Out Chicago

“[Abbott’s] research enables the kind of vivid description à la fellow journalist Erik Larson's The Devil in the White City that make what could be a dry historic account an intriguing read."
– Seattle Times

“Abbott tells her story with just the right mix of relish and restraint, providing a piquant guide to a world of sexuality” —— The Atlantic

“A rollicking tale from a more vibrant time: history to a ragtime beat.”
– Kirkus Reviews

Karen Abbott worked as a journalist on the staffs of "Philadelphia "magazine and "Philadelphia Weekly," and has written for Salon.com and other publications. A native of Philadelphia, she now lives with her husband in Atlanta, where she's at work on her next book. Visit her online at www.sininthesecondcity.com.
Loading...
or
Not Currently Available for Direct Purchase