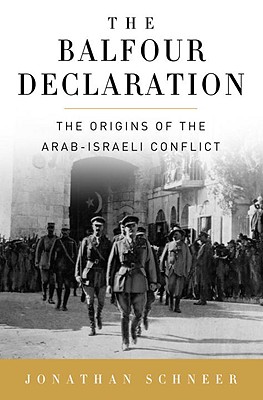 With new material retrieved from historical archives, scholar Jonathan Schneer recounts in dramatic detail the public and private battles in the early 1900s for a small strip of land in the Middle East, battles that started when the governing Ottoman Empire took Germany’s side in World War I. The Balfour Declaration paints an indelible picture of how Arab nationalists, backed by Britain, fought for their future as Zionists in England battled diplomatically for influence. Meanwhile, unbeknownst to either side or even to most members of the British government, Prime Minister David Lloyd George was telling Turkey that she could keep her flag flying over the disputed territory if only she would agree to a separate peace.

The key players in this watershed moment are rendered here in nuanced and detailed relief: Sharif Hussein, the Arab leader who secretly sought British support; Chaim Weizmann, Zionist hero, the folksmensch who charmed British high society; T. E. Lawrence, the legendary “super cerebral” British officer who “set the desert on fire” for the Arabs; Basil Zaharoff, the infamous arms dealer who was Britain’s most important back channel to the Turks; and the other generals and prime ministers, soldiers and negotiators, who shed blood and cut deals to grab or give away the precious land.

A book crucial to understanding the Middle East as it is today, The Balfour Declaration is a rich and remarkable achievement, a riveting volume about the ancient faiths and timeless treacheries that continue to drive global events.

Praise For The Balfour Declaration: The Origins of the Arab-Israeli Conflict…

"In November 1917, the British government stated that it would “view with favour the establishment in
Palestine of a national home for the Jewish people.” It was, in retrospect, a startlingly brief statement,
which received little attention at the time. Since then, Zionists have regarded it as a declaration of the
Jewish right to create an independent Jewish state; for Arabs, it is viewed as an outrageous case of
imperialist manipulation and betrayal. Schneer writes a fascinating and scrupulously balanced account of
the events and intense maneuvers that led to the issuance of the declaration. He superbly navigates
between the various conflicting interests and lobbying efforts of Zionists, Arabs, and opposing elements
within the British government. There are no heroes here; one is left with the impression that the Zionists
“won” simply because they were more relentless and ruthless than their opposition, which included many
non-Zionist Jews."—Booklist

Jonathan Schneer, a specialist in modern British history, is a professor at Georgia Tech's School of History, Technology, and Society. He is the author of five additional books, as well as numerous articles and reviews. A fellow of the American Council of Learned Societies in 1985-86, he has also held research fellowships at Oxford and Cambridge Universities in the UK, as well as at the Erich Remarque Center of New York University. He was a founding editor of "Radical History Review" and is a member of the editorial board of "20th Century British History" and the "London Journal."
Loading...
or
Not Currently Available for Direct Purchase