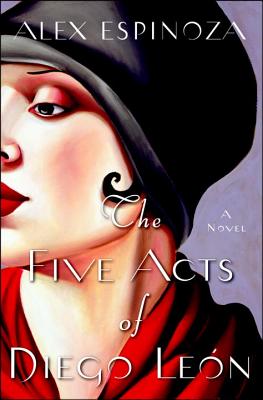 The Five Acts of Diego Leon

Growing up in a rural village at the height of the Mexican Revolution, Diego León has many first loves: singing, dancing, and hearing the stories of his ancestors, the P’urhépecha. But when tragedy strikes, young Diego is sent to the city to live with his aristocratic grandparents, who insist he forget his roots and groom him to take over the family business. Under pressure to enter a profession—and a life—he cares nothing for, and haunted by the violence once again erupting all around him, Diego flees his war-torn country to forge his own destiny.

Diego arrives in Hollywood in 1927, when silent films are giving way to talkies, Prohibition is in full swing, and “Latin lover” types are sought out even as they are looked down upon. Working his way up in the movie business with talent and ingenuity, Diego soon figures out that getting one’s face on the silver screen has as much to do with what goes on behind the camera as what goes on in front of it. But the closer Diego comes to stardom, the more he finds that the past is not so easily escaped, as he is drawn again and again to the painful legacy of history and the wounds of his homeland.

A sweeping, sensual novel of love, ambition, and identity, The Five Acts of Diego León bears all the marks of a classic Hollywood story: romance, betrayal, glamour, and an underdog hero to root for till the end.

“An elegant, startling vision of a Mexican in America, The Five Acts of Diego León proclaims the ascendance of a unique new talent, Alex Espinoza—a Chicano in America certain to surpass the fame of his novel’s silent Hollywood hero. Espinoza takes our literature from a mute, black-and-white era to a national stage with full-spectrum color, in high-tech surround sound.”—Dagoberto Gilb, author of Before the End, After the Beginning


Praise For The Five Acts of Diego Leon…

“Excellent….[The Five Acts of Diego León] has many of the elements of the classic Hollywood novel, but works on a much larger canvas.”
--Los Angeles Review of Books

"Alex Espinoza's vivid storytelling leads us through a hall of mirrors that's as fragmented and multifaceted as identity itself."
--Los Angeles Magazine

"A story undertaken with gusto, imagined with daring."
--The Washington Post Book World

“There’s a lot of action in this story…As a young Latino in Hollywood during the 1920s, Diego hopes to be the next sought-after leading man…Espinoza ties the locations and the historical action together well, reflecting the tumult in the political and social landscape of the first decades of the last century.”
--Historical Novels Review

"Espinoza shows how every gay man in this closeted era was a kind of actor, whether they worked in movies or not ... In telling the story of one fictional character, The Five Acts of Diego León invites readers to ponder the many real people in the past -- and even the present -- who have been forced to conceal their true identities, keeping secrets but sometimes channeling their hidden angst into art."
--High Country News

"The re-creation of Hollywood's golden era is vivid ... The dialogue is crisp, the characters are well-delineated, the story moves quickly."
--Library Journal

“With its colorful narrative and historic sweep, The Five Acts of Diego León has both a story line and characters that a wide readership will surely enjoy.”
--Oscar Hijuelos, author of The Mambo Kings Play Songs of Love

“A story that begins in revolutionary Mexico and travels to Hollywood during the film industry's transition from silent films to talkies, The Five Acts of Diego León breaks greater silences—taboos of race and sexuality, of reinvention and assimilation—in a fantasy called Hollywoodland.”
--Sandra Cisneros, author of The House on Mango Street

"Fresh, surprising, and delightful. There is nowhere this gifted writer can't go."
--Luis Alberto Urrea, author of The Hummingbird's Daughter

“An elegant, startling vision of a Mexican in America, The Five Acts of Diego León proclaims the ascendance of a unique new talent, Alex Espinoza—a Chicano in America certain to surpass the fame of his novel’s silent Hollywood hero. Espinoza takes our literature from a mute, black-and-white era to a national stage with full-spectrum color, in high-tech surround sound.”
--Dagoberto Gilb, author of Woodcuts of Women

Alex Espinoza was born in Tijuana, Mexico. He came to the United States with his family at the age of two and grew up in suburban Los Angeles. Author of the novel "Still Water Saints, "he received an MFA from the University of California, Irvine. A recipient of the Margaret Bridgman Fellowship in Fiction at the Bread Loaf Writers' Conference, Espinoza is currently an associate professor of English at California State University, Fresno.""
Loading...
or
Not Currently Available for Direct Purchase