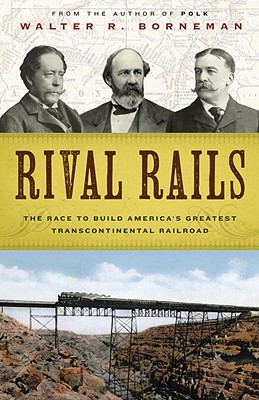 From acclaimed historian Walter R. Borneman comes a dazzling account of the battle to build America’s transcontinental rail lines. Rival Rails is an action-packed epic of how an empire was born—and the remarkable men who made it happen.

After the completion of the first transcontinental railroad in 1869, the rest of the country was up for grabs, and the race was on. The prize: a better, shorter, less snowy route through the corridors of the American Southwest, linking Los Angeles to Chicago. In Rival Rails, Borneman lays out in compelling detail the sectional rivalries, contested routes, political posturing, and ambitious business dealings that unfolded as an increasing number of lines pushed their way across the country.

Borneman brings to life the legendary business geniuses and so-called robber barons who made millions and fought the elements—and one another—to move America, including William Jackson Palmer, whose leadership of the Denver and Rio Grande Western Railroad relied on innovative narrow gauge trains that could climb steeper grades and take tighter curves; Collis P. Huntington of the Central Pacific and Southern Pacific lines, a magnate insatiably obsessed with trains—and who was not above bribing congressmen to satisfy his passion; Edward Payson Ripley, visionary president of the Atchison, Topeka and Santa Fe, whose fiscal conservatism and smarts brought the industry back from the brink; and Jay Gould, ultrasecretive, strong-armer and one-man powerhouse.

In addition, Borneman captures the herculean efforts required to construct these roads—the laborers who did the back-breaking work, boring tunnels through mountains and throwing bridges across unruly rivers, the brakemen who ran atop moving cars, the tracklayers crushed and killed by runaway trains. From backroom deals in Washington, D.C., to armed robberies of trains in the wild deserts, from glorified cattle cars to streamliners and Super Chiefs, all the great incidents and innovations of a mighty American era are re-created with unprecedented power in Rival Rails.

"Walter R. Borneman's Rival Rails is a riveting history of the frenetic race to construct a railroad across the great American Southwest following the Civil War.  Borneman is masterful at writing seamless narrative.  Every page sings with fine writing."—Douglas Brinkley, Professor of History at Rice University and author of The Wilderness Warrior: Theodore Roosevelt and the Crusade for America

Walter R. Borneman is author of several books, including "1812: The War That Forged a Nation, The French and Indian War: Deciding the Fate of North America," and "Polk: The Man Who Transformed the Presidency" and "America," for which he won the Tennessee History Book Award and Colorado Book Award for Biography. He is the president of the Walter V. and Idun Y. Berry Foundation, which funds postdoctoral fellowships in children's health at Stanford University.
Loading...
or
Not Currently Available for Direct Purchase