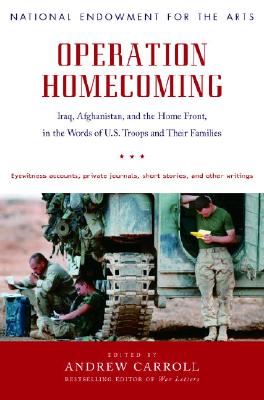 Iraq, Afghanistan, and the Home Front, in the Words of U.S. Troops and Their Families

“Here is what you will not find in the news–the personal cost of war written as clear and beautiful as literature worthy of the name is. These stories are the real thing, passionate, imaginative, searing.”
–Richard Bausch, author of Wives & Lovers

The first book of its kind, Operation Homecoming is the result of a major initiative launched by the National Endowment for the Arts to bring distinguished writers to military bases and inspire U.S. Marines, soldiers, sailors, and airmen and their families to record their wartime experiences. Encouraged by such authors as Tom Clancy, Mark Bowden, Bobbie Ann Mason, Tobias Wolff, Jeff Shaara, and Marilyn Nelson, American military personnel and their loved ones wrote candidly about what they saw, heard, and felt while in Afghanistan and Iraq, as well as on the home front. Taken together, these almost one hundred never-before-published eyewitness accounts, private journals, short stories, letters, and other personal writings become a dramatic narrative that shows the human side of warfare.

• the fear and exhilaration of heading into battle;
• the interactions between U.S. forces and Afghans and Iraqis, both as enemies and friends;
• the boredom, gripes, and humorous incidents of day-to-day life on the front lines;
• the anxiety and heartache of worried spouses, parents, and other loved ones on the home front;
• the sheer brutality of warfare and the physical and emotional toll it takes on those who fight;
• the tearful homecomings for those who returned to the States alive– and the somber ceremonies for those who made the ultimate sacrifice for their nation.

From riveting combat accounts to profound reflections on warfare and the pride these troops feel for one another, Operation Homecoming offers an unflinching and intensely revealing look into the lives of extraordinary men and women. What they have written is without question some of the greatest wartime literature ever published.

“Andrew Carroll has given America a priceless treasure.”
–Tom Brokaw, on War Letters

Proceeds from this book will be used to provide arts and cultural programming to U.S. military communities. For more information, please go to www.OperationHomecoming.gov.