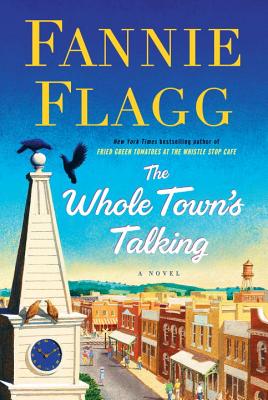 “This book will leave you nostalgic for simpler times and craving a homemade piece of pie! Flagg offers an absolutely lovely story about a small Missouri town from its founding in 1889 through the present and beyond, told through narrative, letters, and a gossip column. I will be joyfully recommending this charming and wonderful story to all readers!”
— Mary OMalley (E), Anderson's Bookshop, Naperville, IL
View the List

The bestselling author of Fried Green Tomatoes at the Whistle Stop Cafe is at her superb best in this fun-loving, moving novel about what it means to be truly alive.

Elmwood Springs, Missouri, is a small town like any other, but something strange is happening at the cemetery. Still Meadows, as it’s called, is anything but still. Original, profound, The Whole Town’s Talking, a novel in the tradition of Thornton Wilder’s Our Town and Flagg’s own Can’t Wait to Get to Heaven, tells the story of Lordor Nordstrom, his Swedish mail-order bride, Katrina, and their neighbors and descendants as they live, love, die, and carry on in mysterious and surprising ways.

Lordor Nordstrom created, in his wisdom, not only a lively town and a prosperous legacy for himself but also a beautiful final resting place for his family, friends, and neighbors yet to come. “Resting place” turns out to be a bit of a misnomer, however. Odd things begin to happen, and it starts the whole town talking.

With her wild imagination, great storytelling, and deep understanding of folly and the human heart, the beloved Fannie Flagg tells an unforgettable story of life, afterlife, and the remarkable goings-on of ordinary people. In The Whole Town’s Talking, she reminds us that community is vital, life is a gift, and love never dies.

Praise for The Whole Town’s Talking

“If there’s one thing Fannie Flagg can do better than anybody else, it’s tell a story, and she outdoes herself in The Whole Town’s Talking. . . . Brilliant . . . equally on the level as her famous Fried Green Tomatoes at the Whistle Stop Cafe.”—The Newport Plain Talk

“A ringing affirmation of love, community and life itself.”—Richmond Times-Dispatch

Praise For The Whole Town's Talking: A Novel (Elmwood Springs #4)…

“The Whole Town’s Talking [is] Fannie Flagg at her best.”—Florida Times Union

“If there’s one thing Fannie Flagg can do better than anybody else, it’s tell a story, and she outdoes herself in The Whole Town’s Talking. . . . Another brilliant novel—equally on the level as her famous Fried Green Tomatoes at the Whistle Stop Cafe.”—The Newport Plain Talk

“Told with warmth, humor and remarkable characters, this touching novel is a tribute to the indomitable spirit of love.”—The Columbus Dispatch

“I could not put this book down and didn’t want the tale to end. Fannie Flagg does it again; a great read you won’t want to miss.”—The Missourian

“[Fannie Flagg] creates a world familiar in its reality and its hopes, and she displays her storytelling skills, ones that are enhanced by her humanity, her optimism and her big heart. . . .The Whole Town’s Talking [is] a story of life’s peaks, valleys and ordinary days—and a ringing affirmation of love, community and life itself.”—Richmond Times-Dispatch

“The Whole Town’s Talking is warm and inviting. Flagg’s Elmwood Springs novels are comfort reads of the best kind, warm and engaging without flash or fuss.”—Miami Herald

“Flagg’s humor shines through as she chronicles their successes, disappointments, and even a mysterious murder or two. . . . The interwoven lives of these completely engaging characters twist and turn in unexpected ways, making this chronicle of a close-knit community a pleasure to read.”—BookPage

Fannie Flagg’s career started in the fifth grade when she wrote, directed, and starred in her first play, titled The Whoopee Girls, and she has not stopped since. At age nineteen she began writing and producing television specials, and later wrote for and appeared on Candid Camera. She then went on to distinguish herself as an actress and a writer in television, films, and the theater. She is the bestselling author of Daisy Fay and the Miracle Man; Fried Green Tomatoes at the Whistle Stop Cafe; Welcome to the World, Baby Girl!; Standing in the Rainbow; A Redbird Christmas; Can’t Wait to Get to Heaven; I Still Dream About You; The All-Girl Filling Station’s Last Reunion; and The Whole Town’s Talking. Flagg’s script for the movie Fried Green Tomatoes was nominated for an Academy Award and the Writers Guild of America Award and won the highly regarded Scripter Award for best screenplay of the year. Fannie Flagg is the winner of the Harper Lee Prize. She lives happily in California and Alabama.
Loading...
or
Not Currently Available for Direct Purchase