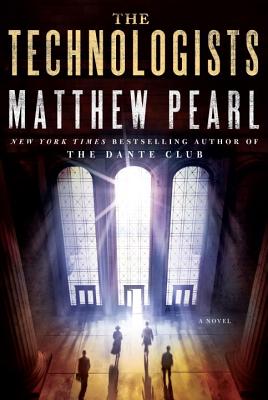 The first class at M.I.T. The last hope for a city in peril.

The acclaimed author of The Dante Club reinvigorates the historical thriller. Matthew Pearl’s spellbinding new novel transports readers to tumultuous nineteenth-century Boston, where the word “technology” represents a bold and frightening new concept. The fight for the future will hinge on . . .

Boston, 1868. The Civil War may be over but a new war has begun, one between the past and the present, tradition and technology. On a former marshy wasteland, the daring Massachusetts Institute of Technology is rising, its mission to harness science for the benefit of all and to open the doors of opportunity to everyone of merit. But in Boston Harbor a fiery cataclysm throws commerce into chaos, as ships’ instruments spin inexplicably out of control. Soon after, another mysterious catastrophe devastates the heart of the city. Is it sabotage by scientific means or Nature revolting against man’s attempt to control it?

The shocking disasters cast a pall over M.I.T. and provoke assaults from all sides—rival Harvard, labor unions, and a sensationalistic press. With their first graduation and the very survival of their groundbreaking college now in doubt, a band of the Institute’s best and brightest students secretly come together to save innocent lives and track down the truth, armed with ingenuity and their unique scientific training.

Led by “charity scholar” Marcus Mansfield, a quiet Civil War veteran and one-time machinist struggling to find his footing in rarefied Boston society, the group is rounded out by irrepressible Robert Richards, the bluest of Beacon Hill bluebloods; Edwin Hoyt, class genius; and brilliant freshman Ellen Swallow, the Institute’s lone, ostracized female student. Working against their small secret society, from within and without, are the arrayed forces of a stratified culture determined to resist change at all costs and a dark mastermind bent on the utter destruction of the city.

Studded with suspense and soaked in the rich historical atmosphere for which its author is renowned, The Technologists is a dazzling journey into a dangerous world not so very far from our own, as the America we know today begins to shimmer into being.


Praise For The Technologists…

Praise for The Technologists

“The Technologists combines everything I love in a thriller: fascinating history, science, and a frightening mystery that demands to be solved. Matthew Pearl is one of my must-read authors. He never fails to intrigue and thrill!”—Tess Gerritsen, author of The Silent Girl

“Fascinating, mesmerizing, and richly atmospheric, The Technologists is the best yet from a true master of the historical thriller. I loved this novel.”—Joseph Finder, New York Times bestselling author of Buried Secrets and Vanished

“Pearl again blends detective fiction with historical characters (such as pioneering feminist and MIT-trained scientist Ellen Swallow), and his cast reads like a who’s who of nineteenth-century Boston. . . . Great fun.”—Publishers Weekly

Matthew Pearl is the "New York Times" bestselling author of "The Dante Club, The Poe Shadow, " and "The Last Dickens, " and the editor of the Modern Library editions of Dante's "Inferno" (translated by Henry Wadsworth Longfellow) and Edgar Allan Poe's "The Murders in the Rue Morgue: The Dupin Tales." Pearl is a graduate of Harvard University and Yale Law School and has taught literature at Harvard and at Emerson College. He lives in Cambridge, Massachusetts.
Loading...
or
Not Currently Available for Direct Purchase