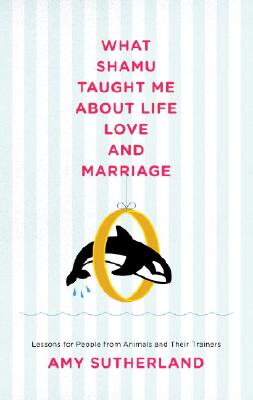 What Shamu Taught Me About Life, Love, and Marriage (Hardcover)

Lessons for People from Animals and Their Trainers

While observing exotic animal trainers for her acclaimed book Kicked, Bitten, and Scratched, journalist Amy Sutherland had an epiphany: What if she used these training techniques with the human animals in her own life–namely her dear husband, Scott? In this lively and perceptive book, Sutherland tells how she took the trainers’ lessons home.

The next time her forgetful husband stomped through the house in search of his mislaid car keys, she asked herself, “What would a dolphin trainer do?” The answer was: nothing. Trainers reward the behavior they want and, just as important, ignore the behavior they don’t. Rather than appease her mate’s rising temper by joining in the search, or fuel his temper by nagging him to keep better track of his things in the first place, Sutherland kept her mouth shut and her eyes on the dishes she was washing. In short order, Scott found his keys and regained his cool. “I felt like I should throw him a mackerel,” she writes. In time, as she put more training principles into action, she noticed that she became more optimistic and less judgmental, and their twelve-year marriage was better than ever.

What started as a goofy experiment had such good results that Sutherland began using the training techniques with all the people in her life, including her mother, her friends, her students, even the clerk at the post office. In the end, the biggest lesson she learned is that the only animal you can truly change is yourself.

Full of fun facts, fascinating insights, hilarious anecdotes, and practical tips, What Shamu Taught Me About Life, Love, and Marriage describes Sutherland’s Alice-in-Wonderland experience of stumbling into a world where cheetahs walk nicely on leashes and elephants paint with watercolors, and of leaving a new, improved Homo sapiens.

Amy Sutherland is the author of "Kicked, Bitten, and Scratched" and "Cookoff." Her articles have appeared in "The New York Times, Los Angeles Times," and T"he Boston Globe." She has a master's degree in journalism from Northwestern University. Her feature piece "What Shamu Taught Me About a Happy Marriage," on which this book is based, was the most viewed and most e-mailed article of "The New York Times "online in 2006. Sutherland divides her time between Boston and Portland, Maine.

Praise For What Shamu Taught Me About Life, Love, and Marriage: Lessons for People from Animals and Their Trainers…

“Sutherland’s a smart, engaging writer, and her stories about the hows and whys of exotic animal training are fun and fascinating.”—Boston Sunday Globe

“In the little, private zoo known as marriage, it helps to remind yourself that you and your partner are just two bipedal primates trying to get along in intimate co-habitation.”—Globe and Mail

“Wise and pragmatic advice . . . The thing I love most about this book is that every other paragraph, Sutherland’s terrific wordsmithing, compelling logic, and anecdotes about exotic animals make me feel like she’s tossed me a biscuit.”—Martha Beck, author of Steering by Starlight and columnist for O: The Oprah Magazine

“Invaluable . . . It succeeds nicely as an animal-training guide, and amusingly as a relationship book.”—Buffalo News