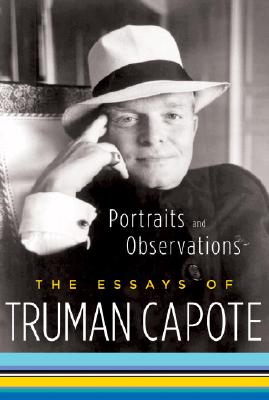 The Essays of Truman Capote

Perhaps no twentieth century writer was so observant and elegant a chronicler of his times as Truman Capote. Whether he was profiling the rich and famous or creating indelible word-pictures of events and places near and far, Capote’s eye for detail and dazzling style made his reportage and commentary undeniable triumphs of the form.

Portraits and Observations is the first volume devoted solely to all the essays ever published by this most beloved of writers. From his travel sketches of Brooklyn, New Orleans, and Hollywood, written when he was twenty-two, to meditations about fame, fortune, and the writer’s art at the peak of his career, to the brief works penned during the isolated denouement of his life, these essays provide an essential window into mid-twentieth-century America as offered by one of its canniest observers. Included are such celebrated masterpieces of narrative nonfiction as “The Muses Are Heard” and the short nonfiction novel “Handcarved Coffins,” as well as many long-out-of-print essays, including portraits of Isak Dinesen, Mae West, Marcel Duchamp, Humphrey Bogart, and Marilyn Monroe.

Among the highlights are “Ghosts in Sunlight: The Filming of In Cold Blood, “Preface to Music for Chameleons, in which Capote candidly recounts the highs and lows of his long career, and a playful self-portrait in the form of an imaginary self-interview. The book concludes with the author’s last written words, composed the day before his death in 1984, the recently discovered
“Remembering Willa Cather,” Capote’s touching recollection of his encounter with the author when he was a young man at the dawn of his career.

Portraits and Observations puts on display the full spectrum of Truman Capote’s brilliance. Certainly, Capote was, as Somerset Maugham famously called him, “a stylist of the first quality.” But as the pieces gathered here remind us, he was also an artist of remarkable substance.

Praise For Portraits and Observations: The Essays of Truman Capote…

“A must-have treasure for Capote fans . . . These are delicious, dramatic, and tender nonfiction portraits and tales.”
–NPR’s Morning Edition


“A wonderful volume . . . Nearly every page can be read with real pleasure. . . . No matter what his subject, [Capote’s] canny, careful art gives it warm and breathing life”
–The Washington Post Book World

“Every piece is a treasure. . . . Pages and pages of remarkably evocative, careful and well-observed prose [delineate,] in a measured and elegant manner, one of the most remarkable American literary lives of the twentieth century.”
–Jane Smiley, Los Angeles Times Book Review

Truman Capote was born in New Orleans on September 30, 1924. He rose to international prominence in 1948 with the publication of his debut novel, "Other Voices, Other Rooms." His other works of fiction include "Breakfast at Tiffany's, A Tree of Night, The Grass Harp," and "Summer Crossing," the author's long-lost first novel, which was rediscovered in 2004 and published by Random House in 2005. His nonfiction novel "In Cold Blood "is widely considered one of the greatest books of the twentieth century. Capote twice won the O. Henry Memorial Short Story Prize and was a member of the National Institute of Arts and Letters. He died on August 25, 1984, shortly before his sixtieth birthday.
Loading...
or
Not Currently Available for Direct Purchase