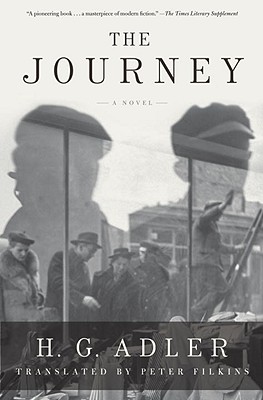 A major literary event: the first-ever English translation of a lost masterpiece of Holocaust literature by acclaimed author and survivor H. G. Adler

The story behind the story of The Journey is remarkable in itself: Award-winning translator Peter Filkins discovered an obscure German novel in a Harvard Square bookstore and, reading it, realized that it was a treasure unavailable to English speakers. It was the most powerful book by the late H. G. Adler, a survivor of Theresienstadt and Auschwitz, a writer whose work had been praised by authors from Elias Canetti to Heinrich Böll and yet remained unknown to international audiences.

Written in 1950 after Adler’s emigration to England, The Journey was not released in Germany until 1962. After the war, larger publishing houses stayed away from novels about the Holocaust, feeling that the tragedy could not be fictionalized and that any metaphorical interpretation was obscene. Only a small publisher was in those days willing to take on The Journey.

Yet Filkins found that Adler had depicted the event in a unique, truly modern, and deeply moving way. Avoiding specific mention of country or camps–even of Nazis and Jews–The Journey is a lyrical nightmare of a family’s ordeal and one member’s survival. Led by the doctor patriarch Leopold, the Lustig family finds itself “forbidden” to live, uprooted into a surreal and incomprehensible circumstance of deprivation and death. This cataclysm destroys father, daughter, sister, and wife and leaves only Paul, the son, to live again among those who saved or sacrificed him. The Journey reveals a world beset by an “epidemic of mental illness . . . As a result of the epidemic, everyone was crazy, and once they finally recognized what was happening it was too late.”

Linked by its innovative style to the work of James Joyce and Virginia Woolf, The Journey is as much a revelation as other recent discoveries on the subject as the works of W. G. Sebald and Irène Némirovsky’s Suite Francaise. It is a book proving that art can portray the unimaginable and expand people’s perceptions of it, a work anyone interested in recent history and modern literature must read.

Praise For The Journey…

“H.G. Adler’s works . . . survive as a magnificent achievement of courage, art, and the stubborn will to survive.”
–Peter Demetz, Sterling Professor Emeritus of Germanic Language and Literature, Yale University

“A masterpiece . . . For me, Adler has restored hope to modern literature.”
–Elias Canetti, winner of the Nobel Prize for Literature

“A pioneering book . . . a masterpiece of modern fiction.”
–The Times Literary Supplement