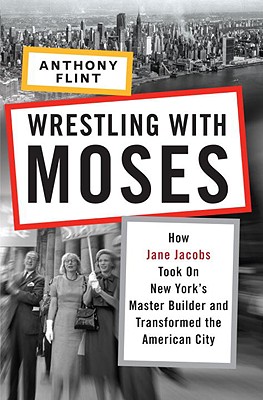 To a young Jane Jacobs, Greenwich Village, with its winding cobblestone streets and diverse makeup, was everything a city neighborhood should be. The activist, writer, and mother of three grew so fond of her bustling community that it became a touchstone for her landmark book The Death and Life of Great American Cities. But consummate power broker Robert Moses, the father of many of New York’s most monumental development projects, saw things differently: neighborhoods such as Greenwich Village were badly in need of “urban renewal.” Notorious for exacting enormous human costs, Moses’s plans had never before been halted–not by governors, mayors, or FDR himself, and certainly not by a housewife from Scranton.

The epic rivalry of Jacobs and Moses, played out amid the struggle for the soul of a city, is one of the most dramatic and consequential in modern American history. In Wrestling with Moses, acclaimed reporter and urban planning policy expert Anthony Flint recounts this thrilling David-and-Goliath story, the legacy of which echoes through our society today.

The first ordinary citizens to stand up to government plans for their city, Jacobs and her colleagues began a nationwide movement to reclaim cities for the benefit of their residents. Time and again, Jacobs marshaled popular support and political power against Moses, whether to block traffic through her beloved Washington Square Park or to prevent the construction of the Lower Manhattan Expressway, a ten-lane elevated superhighway that would have destroyed centuries-old streetscapes and displaced thousands of families and businesses.

Like A Civil Action before it, Wrestling with Moses is the tale of a local battle with far-ranging significance. By confronting Moses and his vision, Jacobs forever changed the way Americans understood the city, and inspired citizens across the country to protest destructive projects in their own communities. Her story reminds us of the power we have as individuals to confront and defy reckless authority.

Anthony Flint is the director of public affairs at the Lincoln Institute of Land Policy, a think-tank on land and development issues located in Cambridge, MA, and was a reporter at "The Boston Globe" for sixteen years. He is the author of "This Land: The Battle Over Sprawl and the Future of America." He lives in Boston.

Praise For Wrestling with Moses: How Jane Jacobs Took On New York's Master Builder and Transformed the American City…

“Wrestling with Moses is an epic tale filled with nuanced lessons. Flint is passionate in supporting Jacobs’s once radical but now commonly shared views, yet he deftly leaves room for Moses. This is an indispensable read for anyone interested in the shaping of cities.”—Alex Krieger, professor of urban design, Harvard University

“In this gripping and inspiring story of one woman who galvanized her community against powerful, destructive forces, Anthony Flint gets to the heart of what makes neighborhoods–and cities–thrive.”—Richard Florida, author of The Rise of the Creative Class and Who’s Your City?

“Jane Jacobs, the crownless queen of cities, defended New York against the assault that would have destroyed its pattern of the daily life. Wrestling with Moses is a masterly tale of how her mandate endures.”—Jane Holtz Kay, architecture critic for The Nation and author of Asphalt Nation

“Anthony Flint has written a riveting account of a struggle between opposites that forever redefined the American city. With no formal training in urban planning, Jane Jacobs had the audacity to take on Robert Moses and the passion to save old New York from the wrecking ball.”—James L. Swanson, Edgar Award—winning author of Manhunt: The 12-Day Chase for Lincoln’s Killer

“Beautifully written, Wrestling with Moses is a step back in time to the bohemia of Greenwich Village in the 1960s, when Bob Dylan’s music filled the streets and revolution was in the air. As a woman standing up to power, Jane Jacobs blazed a trail. This is a remarkable book.”—Brad Matsen, author of Titanic’s Last Secrets

“Anthony Flint has not only captured the life and times of the remarkable Jane Jacobs but, more important, he has delineated the amazing cast of characters–politicians, design professionals, neighbors, and citizens–that populated her life and her city. Wrestling with Moses will soon become classic, essential reading for anyone concerned with cities, past, present, and future.”—Eugenie L. Birch, Lawrence C. Nussdorf Professor of Urban Research and Education, University of Pennsylvania

“Reporter Flint offers a fascinating history of the two combatants as well as an architectural history of New York City.”—Booklist