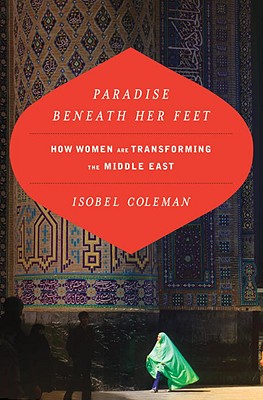 Paradise Beneath Her Feet

How Women Are Transforming the Middle East

Over the centuries and throughout the world, women have struggled for equality and basic rights. Their challenge in the Middle East has been intensified by the rise of a political Islam that too often condemns women's empowerment as Western cultural imperialism or, worse, anti-Islamic. In Paradise Beneath Her Feet, Isobel Coleman shows how Muslim women and men are fighting back with progressive interpretations of Islam to support women's rights in a growing movement of Islamic feminism.
In this timely book, Coleman journeys through the strategic crescent of the greater Middle East Saudi Arabia, Iraq, Iran, Afghanistan, and Pakistan to reveal how activists are working within the tenets of Islam to create economic, political, and educational opportunities for women. Coleman argues that these efforts are critical to bridging the conflict between those championing reform and those seeking to oppress women in the name of religious tradition. Success will bring greater stability and prosperity to the Middle East and stands to transform the region.
Coleman highlights a number of Muslim men and women who are among the most influential Islamic feminist thinkers, and brilliantly illuminates the on-the-ground experiences of women who are driving change: Sakena Yacoobi, an Afghan educator, runs more than forty women's centers across Afghanistan, providing hundreds of thousands of women with literacy and health classes and teaching them about their rights within Islam. Madawi al-Hassoon, a successful businesswoman, is challenging conservative conventions to break new ground for Saudi professional women. Salama al-Khafaji, a devout dentist-turned-politician, relies on moderate interpretations of Islam to promote opportunities for women in Iraq's religiously charged environment. These quiet revolutionaries are using Islamic feminism to change the terms of religious debate, to fight for women's rights within Islam instead of against it.
There is no mistaking that women and women's issues are very much on the front lines of a war that is taking place between advocates of innovation, tolerance, and plurality and those who use violence to reject modernity in Muslim communities around the world. Ultimately, Paradise Beneath Her Feet offers a message of hope: Change is happening and more often than not, it is being led by women.


Praise For Paradise Beneath Her Feet: How Women Are Transforming the Middle East…

“Outstanding . . . [Isobel Coleman] takes us into remote villages and urban bureaucracies to find the brave men and women working to create change in the Middle East.”—Los Angeles Times

“[An] engrossing portrait of real Muslim women that reveals how Islamic feminists . . . are working with and within the culture, rather than against it . . . to forge ‘a legitimate Islamic alternative to the current repressive system.’ Coleman doesn’t diminish the enormity of the struggle, but she argues convincingly that it might yet rewrite Islam’s future.”—Publishers Weekly (starred review)

“A nuanced view of Islam’s role in public life that is cautiously hopeful.”—The Economist

“Eye-opening . . . Deeply religious, profoundly determined and modern in every way, these are twenty-first-century women bent on change. Hear them roar and see a future being born before our eyes.”—Booklist

"I would read anything by Isobel Coleman. No other writer I know sheds greater light into the social and political conflicts of the Greater Middle East with more insight and sensitivity. Far from a dry academic tome on the plight of women in this troubled region, Paradise Beneath Her Feet offers readers an immediate, unbiased account of the lives of real women who are challenging not only the unjust restrictions placed on them by their own societies, but also the tired stereotypes and empty generalizations placed on them by the West. This is a clearly written, deeply moving, and wonderfully enlightening book."—Reza Aslan, author of No God but God and How to Win A Cosmic War

"Isobel Coleman has written a profoundly important book that illustrates how and why women are at the core of human progress, especially in the 21st century. She traveled the Islamic world to capture first-hand the poignant stories of a new generation of leaders as they struggle to transform their societies. A must-read for anyone who wants to understand the region." —Robin Wright, author of Dreams and Shadows The Future of the Middle East

"Women are on the front lines of our most critical human rights struggles today, particularly in war-torn countries like Afghanistan and Pakistan.  Isobel Coleman has written a deeply engaging book that shows how Muslim women—and men—across the greater Middle East are driving social justice by promoting cultural change from within their own societies. This is a must read for anyone who cares about truly sustainable development."—Angelina Jolie, UN Goodwill Ambassador and co-chair, the Jolie-Pitt Foundation

Isobel Coleman is a senior fellow for U.S. foreign policy at the Council on Foreign Relations, where she also directs the council s Women and Foreign Policy program. Her writing has appeared in publications such as "Foreign Affairs, Foreign Policy," the "Financial Times," the "International Herald Tribune," "USA Today," and "The Christian Science Monitor." She is a frequent speaker at academic, business, and policy conferences and a guest commentator on networks including CNN, the BBC, Al Jazeera, and NPR. She lives in the New York area with her husband and children.