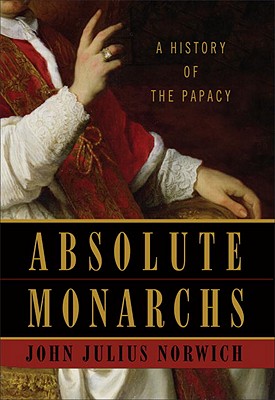 “Renowned historian Norwich offers a rollicking account of the men who held the papal office, their shortcomings and their virtues, and the impact of the papacy on world history. He conducts us masterfully on a tour of the lives of the popes from Peter to Benedict XVI. . . . Entertaining and deeply researched, Norwich’s history offers a wonderful introduction to papal lives.”
—Publishers Weekly

“Historian, travel writer, and television documentarian Norwich presents an excellent, often surprising history of that 2,000-year-old institution….he focuses on political history as he traces the evolution of the papacy as an institution, while at the same time providing entertaining profiles of the most historically significant popes….An outstanding historical survey.”
—Booklist

“When Norwich writes, I read; this member of the House of Lords is a notable and engrossing historian, perhaps best known for his monumental study of Byzantium. Here he offers a history of the nearly two-millennia-old papacy that should be popular with many readers.”
—Library Journal

“A spirited, concise chronicle of the accomplishments of the most noteworthy popes. . . . Norwich doesn’t skirt controversies, ancient and present, in this broad, clear-eyed assessment.”
—Kirkus Reviews

With the papacy embattled in recent years, it is essential to have the perspective of one of the world’s most accomplished historians. In Absolute Monarchs, John Julius Norwich captures nearly two thousand years of inspiration and devotion, intrigue and scandal. The men (and maybe one woman) who have held this position of infallible power over millions have ranged from heroes to rogues, admirably wise to utterly decadent. Norwich, who knew two popes and had private audiences with two others, recounts in riveting detail the histories of the most significant popes and what they meant politically, culturally, and socially to Rome and to the world.

Norwich presents such brave popes as Innocent I, who in the fifth century successfully negotiated with Alaric the Goth, an invader civil authorities could not defeat, and Leo I, who two decades later tamed (and perhaps paid off) Attila the Hun. Here, too, are the scandalous figures: Pope Joan, the mythic woman said (without any substantiation) to have been elected in 855, and the infamous “pornocracy,” the five libertines who were descendants or lovers of Marozia, debauched daughter of one of Rome’s most powerful families.

Absolute Monarchs brilliantly portrays reformers such as Pope Paul III, “the greatest pontiff of the sixteenth century,” who reinterpreted the Church’s teaching and discipline, and John XXIII, who in five short years starting in 1958 “opened up the church to the twentieth century,” instituting reforms that led to Vatican II. Norwich brings the story to the present day with Benedict XVI, who is coping with a global priest sex scandal.

Epic and compelling, Absolute Monarchs is the astonishing story of some of history’s most revered and reviled figures, men who still cast light and shadows on the Vatican and the world today.


Praise For Absolute Monarchs: A History of the Papacy…

“As a historian, Lord Norwich knows what matters. As a writer, he has a taste for beauty, a love of language, and an enlivening wit. He contrives, as no English writer has done before, to sustain a continuous interest in that crowded history.”—Hugh Trevor-Roper, author of The Last Days of Hitler and The Golden Age of Europe

“Norwich is an enchanting and satisfying raconteur.”—The Washington Post

“He has put readers of this generation more in his debt than any other English writer.”—The Sunday Times (London)

“Norwich is a historian of uncommon urbanity: scholarly and erudite but never pedantic. His style is as graceful and easy as it is knowledgeable.”—Los Angeles Times

John Julius Norwich is one of Britain's preeminent historians and travel writers. He has written the histories of Norman Sicily, Byzantium, Venice, and the Mediterranean. Other books have been on Shakespeare's history plays, on music, and on architecture.
Loading...
or
Not Currently Available for Direct Purchase