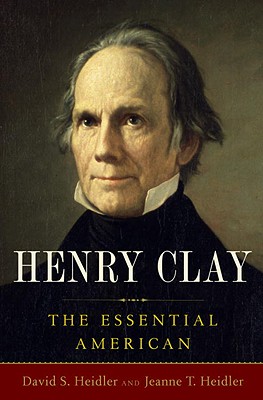 The epic life and times of one of the most important political figures in our history.

He was the Great Compromiser, a canny and colorful legislator and leader whose life mirrors the story of America from its founding until the eve of the Civil War. Speaker of the House, senator, secretary of state, five-time presidential candidate, and idol to the young Abraham Lincoln, Henry Clay is captured in full at last in this rich and sweeping biography that vividly portrays all the drama of his times.

David S. Heidler and Jeanne T. Heidler present Clay in his early years as a precocious, witty, and optimistic Virginia boy, raised on a farm, who at the age of twenty transformed himself from bumpkin to attorney—a shrewd and sincere defender of the ordinary man who would be his eventual political base. The authors reveal Clay’s tumultuous career in Washington, one that transformed the capital and the country. Nicknamed “the Western Star,” Clay became the youngest Speaker of the House shortly before the War of 1812 and transformed that position into one of unprecedented power. Then, as a senator, he joined and sometimes fought John Calhoun and Daniel Webster to push through crucial legislation affecting everything from slavery to banking. Commonly regarded as the greatest U.S. senator in history, Clay served under ten presidents and overshadowed most of them, with the notable exception of his archrival Andrew Jackson. Clay ran unsuccessfully for president five times, and his participation in the deadlocked election of 1824 brought about the “Corrupt Bargain” with John Quincy Adams that made Clay secretary of state—and haunted him for the rest of his career. As no other book, Henry Clay humanizes Clay’s marriage to plain, wealthy Lucretia Hart, a union rumored to be mercenary on his part but that lasted fifty-three years and produced eleven children.

Featuring an inimitable supporting cast including Aaron Burr, Thomas Jefferson, James Madison, James Monroe, James Polk, and Abraham Lincoln, Henry Clay is beautifully written and replete with fresh anecdotes and insights. But it is Henry Clay who often rises above them all. Horse trader and risk taker, arm twister and joke teller, Clay was the consummate politician who gave ground, made deals, and changed the lives of millions. His life is an astounding tale—and here superbly told.

"In this engaging biography of an important American lawmaker, David and Jeanne Heidler paint a revealing portrait of Henry Clay, a man who was critical to the life of the nation in the tumultuous 19th century.  Never president but always in the arena, Clay is a remarkable architect of the Union, and we owe the Heidlers a debt for bringing him to life in these pages."—Jon Meacham, Pulitzer-Prize winning author of American Lion


"Henry Clay's 49-year political career bridged the America of Alexander Hamilton and the America of Abraham Lincoln. Like them, he labored to strengthen and preserve the Union, and to secure its economic development through an enlightened alliance between private enterprise and public authority. Beautifully written, richly detailed, and wonderfully informative, David and Jeanne Heidler's account of Clay's life is deeply sympathetic, yet not uncritical. It should appeal to both academic and general audiences. These two accomplished historians have accorded a great statesman the biography he deserves."—Daniel Walker Howe, Pulitzer-Prize winning author of What Hath God Wrought: The Transformation of America, 1815-1848

"Although Henry Clay ran three times for president and lost each time, he nevertheless dominated the American political scene during the first half of the nineteenth century.  His unparalleled combination of skill, charisma, and energy are on display in this biography by David and Jeanne Heidler, which offers new information and insights on the man whom Abraham Lincoln described as "my beau ideal of a statesman." "—James M. McPherson, Pulitzer-Prize winning author of Battle Cry of Freedom: The Civil War Era

David S. Heidler and Jeanne T. Heidler have written numerous scholarly books and articles dealing with the history of the early American republic, the Antebellum period, and the Civil War. David Heidler is associated with the Department of History at Colorado State University-Pueblo, and Jeanne Heidler is professor of history at the United States Air Force Academy, where she is the senior civilian member of her department. The Heidlers live in Colorado Springs.