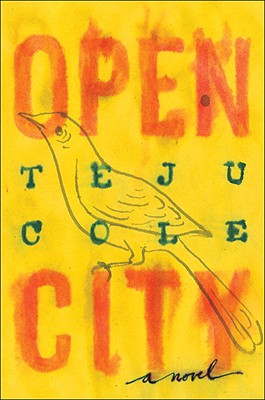 “The past, if there is such a thing, is mostly empty space, great expanses of nothing, in which significant persons and events float. Nigeria was like that for me: mostly forgotten, except for those few things that I remembered with outsize intensity.”

Along the streets of Manhattan, a young Nigerian doctor doing his residency wanders aimlessly. The walks meet a need for Julius: they are a release from the tightly regulated mental environment of work, and they give him the opportunity to process his relationships, his recent breakup with his girlfriend, his present, his past. Though he is navigating the busy parts of town, the impression of countless faces does nothing to assuage his feelings of isolation.

But it is not only a physical landscape he covers; Julius crisscrosses social territory as well, encountering people from different cultures and classes who will provide insight on his journey—which takes him to Brussels, to the Nigeria of his youth, and into the most unrecognizable facets of his own soul.

A haunting novel about national identity, race, liberty, loss, dislocation, and surrender, Teju Cole’s Open City seethes with intelligence. Written in a clear, rhythmic voice that lingers, this book is a mature, profound work by an important new author who has much to say about our country and our world.

"Reminiscent of the works of W.G. Sebald, this dreamy, incantatory debut was the most beautiful novel I read this year—the kind of book that remains on your nightstand long after you finish so that you can continue dipping in occasionally as a nighttime consolation." –Ruth Franklin, The New Republic

“On the surface, the story of a young, foreign psychiatry resident in post-9/11 New York City who searches for the soul of the city by losing himself in extended strolls around teeming Manhattan. But it's really a story about a lost nation struggling to regain a sense of direction after that shattering, disorienting day 10 years ago. A quiet, lyrical and profound piece of writing.” –Seattle Times, 32 of the Year’s Best Books

“[Open City is] lean and mean and bristles with intelligence. The multi-culti characters and streets of New York are sharply observed and feel just right…Toward the end, there’s a poignant, unexpected scene in a tailor’s shop that’s an absolute knockout.” –Jessica Hagedorn, author of Toxicology in Salon.com “Writers choose their favorite books of 2011”

“I couldn't stop reading Teju Cole's debut novel and was blown away by his ability to capture the human psyche with such beautiful yet subtle prose.” –Salon.com, Best Books of 2011

“An unusual accomplishment, ‘Open City’ is a precise and poetic meditation on love, race, identity, friendship, memory, dislocation and Manhattan bird life.” –The Economist, 2011 Books of the Year

“The most interesting new writer I encountered this year.” –Books and Culture, Favorite Books of 2011

"A Sebaldesque wander through New York." –The Guardian, Best Books of the Year

“An indelible debut novel. Does precisely what literature should do: it brings together thoughts and beliefs, and blurs borders…A compassionate and masterly work.” – The New York Times Book Review

“The cool, concise prose of Open City draws you in more quietly, then breaks your heart. Who knew that taking a long walk in Manhattan could be so profound?” –Jessica Hagedorn, author of Toxicology in New York Magazine

“My favourite novel of the year, dreamlike and meandering, like the best of W G Sebald.” –Alain de Botton, The New Statesman

“[A] remarkable and highly accomplished first novel. . . . exquisitely composed. . . .I have read it twice, and I still cannot pin it down to a theme or a type. At once symbolical and precise, part fiction, part reportage or memoir, it is beyond category.”  –Jan Morris, The Independent

“Beautiful, subtle, and finally, original…What moves the prose forward is the prose—the desire to write, to defeat solitude by writing. Cole has made his novel as close to a diary as a novel can get, with room for reflection, autobiography, stasis, and repetition. This is extremely difficult, and many accomplished novelists would botch it, since a sure hand is needed to make the writer’s careful stitching look like a thread merely being followed for its own sake. Mysteriously, wonderfully, Cole does not botch it.” – James Woods, The New Yorker

“Nothing escapes Julius, the narrator of Teju Cole’s excellent debut novel…In Cole’s intellingent, finely observed portrait, Julius drifts through cities on three continents, repeatedly drawn into conversation with solitary souls like him: people struggling with the emotional rift of having multiple homelands but no home.”-- GQ

“A complicated portrait of a narrator whose silences speak as loudly as his words—all articulated in an effortlessly elegant prose…Teju Cole has achieved, in this book, a rare balance. He captures life’s urgent banality, and he captures, too, the ways in which the greater subjects glimmer darkly in the interstices.”—Claire Messud, The New York Review of Books

“The most thoughtful and provocative debut I’ve read in a long time. The best first novel of 2011.” – The Daily Beast

“In another novel the city would serve as a mere setting. Cole, though, all but foists it on us in case we might be tempted to narrow our view or even look away.”-- New York Daily News

“Intelligent and panoramic…engaged with the world in a rare and refreshing way.”—Publishers Weekly (starred review)

“One of the most intriguing novels you’ll likely read…the alienated but sophisticated viewpoint is oddly poignant and compelling…reads like Camus’s L’etranger.”—Library Journal

“Open City is a meditation on history and culture, identity and solitude. The soft, exquisite rhythms of its prose, the display of sensibility, the lucid intelligence, make it a novel to savour and treasure.” —Colm Tóibín, author of The Master and Brooklyn

“The pages of Open City unfold with the tempo of a profound, contemplative walk through layers of histories and their posthumous excavations. The juxtaposition of encounters, seen through the eyes of a knowing flâneur, surface and then dissolve like a palimpsest composed, outside of time, by a brilliant master.”
—Rawi Hage, author of De Niro’s Game, winner of the International IMPAC Dublin Literary Award

“A gorgeous, crystalline, and cumulative investigation of memory, identity, and erasure. It gathers its power inexorably, page by page, and ultimately reveals itself as nothing less than a searing tour de force. Teju Cole might just be a W. G. Sebald for the twenty-first century.”
—Anthony Doerr, author of The Shell Collector

Teju Cole was raised in Nigeria and came to the United States in 1992. He is a writer, photographer, and professional historian of early Netherlandish art. "Open City" is his first novel. He lives in New York City.