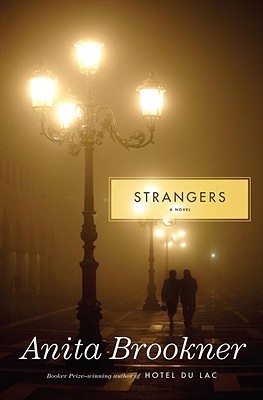 Literary master Anita Brookner’s elegant style is manifest on every page of her brilliant new novel. Beautifully crafted and emotionally evocative, Strangers portrays the magic and depth of real life, telling the rich story of an ordinary man whose unexpected longings, doubts, and fears are universal.

Paul Sturgis is resigned to his bachelorhood and the quietude of his London flat. He occasionally pays obliging visits to his nearest living relative, Helena, his cousin’s widow and a doyenne of decorum who, like Paul, bears a tacit loneliness.
To avoid the impolite complications of turning down Helena’s Christmas invitation, Paul sets off for a holiday in Venice, where he meets Mrs. Vicky Gardner. Younger than Paul by several decades, the intriguing and lovely woman is in the midst of a divorce and at a crossroads in her life. Upon his return to England, a former girlfriend, Sarah, reenters Paul’s life. These two women reroute Paul’s introspections and spark a transformation within him.

Paul’s steady and preferred isolation now conflicts with the stark realization of his aloneness and his need for companionship in even the smallest degree. This awareness brings with it a torrent of feelings–reassessing his Venetian journey, desiring change, and fearing death. Ultimately, his discoveries about himself will lead Paul to make a shocking decision about his life.

Anita Brookner was born in London and, apart from several years in Paris, has lived there ever since. She trained as an art historian and taught at the Courtauld Institute of Art until 1988. Strangers is her twenty-fourth novel.

“Few novelists can stand with Anita Brookner when it comes to the interior revelations of the human heart . . . Every page has a felicity of wording that makes you want to . . . underline passages that you don’t want to forget.”—Seattle Times