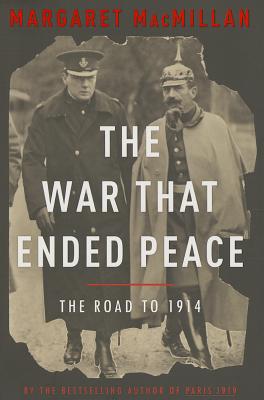 The War That Ended Peace


From the bestselling and award-winning author of Paris 1919 comes a masterpiece of narrative nonfiction, a fascinating portrait of Europe from 1900 up to the outbreak of World War I.

The century since the end of the Napoleonic wars had been the most peaceful era Europe had known since the fall of the Roman Empire. In the first years of the twentieth century, Europe believed it was marching to a golden, happy, and prosperous future. But instead, complex personalities and rivalries, colonialism and ethnic nationalisms, and shifting alliances helped to bring about the failure of the long peace and the outbreak of a war that transformed Europe and the world.

The War That Ended Peace brings vividly to life the military leaders, politicians, diplomats, bankers, and the extended, interrelated family of crowned heads across Europe who failed to stop the descent into war: in Germany, the mercurial Kaiser Wilhelm II and the chief of the German general staff, Von Moltke the Younger; in Austria-Hungary, Emperor Franz Joseph, a man who tried, through sheer hard work, to stave off the coming chaos in his empire; in Russia, Tsar Nicholas II and his wife; in Britain, King Edward VII, Prime Minister Herbert Asquith, and British admiral Jacky Fisher, the fierce advocate of naval reform who entered into the arms race with Germany that pushed the continent toward confrontation on land and sea.

There are the would-be peacemakers as well, among them prophets of the horrors of future wars whose warnings went unheeded: Alfred Nobel, who donated his fortune to the cause of international understanding, and Bertha von Suttner, a writer and activist who was the first woman awarded Nobel’s new Peace Prize. Here too we meet the urbane and cosmopolitan Count Harry Kessler, who noticed many of the early signs that something was stirring in Europe; the young Winston Churchill, then First Lord of the Admiralty and a rising figure in British politics; Madame Caillaux, who shot a man who might have been a force for peace; and more. With indelible portraits, MacMillan shows how the fateful decisions of a few powerful people changed the course of history.

Taut, suspenseful, and impossible to put down, The War That Ended Peace is also a wise cautionary reminder of how wars happen in spite of the near-universal desire to keep the peace. Destined to become a classic in the tradition of Barbara Tuchman’s The Guns of August, The War That Ended Peace enriches our understanding of one of the defining periods and events of the twentieth century.

Praise for The War That Ended Peace

“Magnificent . . . The War That Ended Peace will certainly rank among the best books of the centennial crop.”—The Economist

“Masterly . . . marvelous . . . Those looking to understand why World War I happened will have a hard time finding a better place to start.”—The Christian Science Monitor

“The debate over the war’s origins has raged for years. Ms. MacMillan’s explanation goes straight to the heart of political fallibility. . . . Elegantly written, with wonderful character sketches of the key players, this is a book to be treasured.”—The Wall Street Journal

“One of the strengths of The War That Ended Peace is MacMillan’s ability to evoke the world at the beginning of the twentieth century. . . . MacMillan’s portraits of the men who took Europe to war are superb. . . . The logic of MacMillan’s argument is such that even now, as she leads us day by day, hour by hour through the aftermath of the assassination of Archduke Franz Ferdinand in Sarajevo on June 28, 1914, we expect some statesman or other to jump on the lighted fuse. . . . ‘There are always choices,’ MacMillan keeps reminding us.”—The New York Times Book Review (Editor’s Choice)

“Magnificent . . . The War That Ended Peace will certainly rank among the best books of the centennial crop. . . . [MacMillan] deftly navigates the roiling currents and counter-currents of the pre-war decades. . . . The Great War had a kaleidoscope of causes. Ms. MacMillan tackles them all, with [a] blend of detail and sweeping observation.”—The Economist

“The debate over the war’s origins has raged for years. Ms. MacMillan’s explanation goes straight to the heart of political fallibility. Almost every assumption made by the leaders of Europe turned out to be wrong. Elegantly written, with wonderful character sketches of the key players, this is a book to be treasured.”—The Wall Street Journal

“Masterly . . . marvelous . . . Historians have long argued about why the war started and whether it could have been avoided. . . . Margaret MacMillan’s new book The War That Ended Peace: The Road to 1914 will be a welcome addition to these debates. . . . She takes a long look and examines the many forces that had been moving Europe in the direction of a war for a quarter century. . . . MacMillan is a master of narrative detail and the telling anecdote and this makes for a lively read. She does not break new ground in this book as much as present an exceptionally complex story in a way that will appeal to the general reader. Those looking to understand why World War I happened will have a hard time finding a better place to start.”—The Christian Science Monitor

“Margaret MacMillan’s The War That Ended Peace [stands] out because [it reflects] the immensely complex web of politics, power, and relationships that made war possible, if not inevitable.”—The Daily Beast

“A magisterial 600-page panorama . . . a lively and sophisticated overview of the international crises that shook prewar Europe . . . MacMillan is a wry and humane chronicler of this troubled world. . . . The historian’s task, she suggests, is not to judge but to understand. . . . As MacMillan observes in a closing sentence that is well worth taking to heart, ‘there are always choices.’”—Christopher Clark, London Review of Books

“[A] richly textured narrative about World War I . . . addressing the war’s build-up . . . MacMillan tells this familiar story with panache. A major contribution, however, is her presentation of its subtext, as Europe’s claims to be the world’s most advanced civilization ‘were being challenged from without and undermined from within.’ . . . MacMillan eloquently shows that ‘turning out the lights’ was not inevitable, but a consequence of years of decisions and reactions: a slow-motion train wreck few wanted but none could avoid.”—Publishers Weekly (starred review)

“Everything can be lent a veneer of inevitability, but history rarely works in such a linear manner. But MacMillan, famous for her scholarship on the peace concluding WWI, avoids this trap. She shows, again and again, that events could have run in any number of different directions.”—Booklist

“Thorough . . . lively . . . Exhaustive in its coverage of diplomatic maneuvering and the internal political considerations of the various nations, the book includes comprehensive discussions of such motivating issues as Germany’s fears of being surrounded, Austria-Hungary’s fears of falling apart and Russia’s humiliation after losing a war with Japan.”—Kirkus Reviews

“The War That Ended Peace tells the story of how intelligent, well-meaning leaders guided their nations into catastrophe. These epic events, brilliantly described by one of our era’s most talented historians, warn of the dangers that arise when we fail to anticipate the consequences of our actions. This is one of the finest books I have ever read on the causes of World War I.”—Madeleine Albright, former secretary of state

“With sure deftness, Margaret MacMillan manages to combine excellent history with elements of the cliff-hanger. You keep hoping that, at the last moment, one of those idiot leaders of 1914 might see the light and blink before it’s too late. No one is better equipped to recount this story than Margaret MacMillan.”—Sir Alistair Horne, author of The Price of Glory

“In this epic tale of human folly, Margaret MacMillan brilliantly explores the minds of the flawed, fascinating men whose misguided decisions led to a conflagration that few wanted or believed would actually happen. The War That Ended Peace is a must-read book for our time.”—Lynne Olson, author of Those Angry Days

“Once again, Margaret MacMillan proves herself not just a masterly historian but a brilliant storyteller. She brings to life the personalities whose decisions, rivalries, ambitions, and fantasies led Europe to ‘lay waste to itself’ and triggered decades of global conflict. Hers is a cautionary tale of follies a century in the past that seem all too familiar today.”—Strobe Talbott, president, Brookings Institution

“The War That Ended Peace is a masterly explanation of the complex forces that brought the Edwardian world crashing down. Utterly riveting, deeply moving, and impeccably researched, Margaret MacMillan’s latest opus will become the definitive account of old Europe’s final years.”—Amanda Foreman, author of A World on Fire

Margaret MacMillanreceived her PhD from Oxford University and is now a professor of international history at Oxford, where she is also the warden of St. Antony s College. She is a fellow of the Royal Society of Literature; a senior fellow of Massey College, University of Toronto; and an honorary fellow of Trinity College, University of Toronto, and of St Hilda s College, Oxford University. She sits on the boards of the Mosaic Institute and the Reuters Institute for the Study of Journalism, and on the editorial boards of"The International History Review"and"First World War Studies." She also sits on the advisory board of the Institute for Historical Justice and Reconciliation and is a Trustee of the Rhodes Trust. Her previous books include"Dangerous Games: The Uses and Abuses of History, Nixon and Mao: The Week That Changed the World, Women of the Raj: The Mothers, Wives, and Daughters of the British Empire in India," and"Paris 1919: Six Months That Changed the World, "which won the Samuel Johnson Prize, the PEN Hessell-Tiltman Prize, and the Duff Cooper Prize and was a"New York Times"Editors Choice."
Loading...
or
Not Currently Available for Direct Purchase