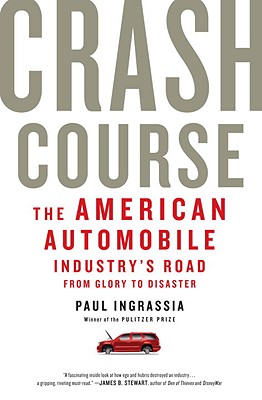 The American Automobile Industry's Road from Glory to Disaster

This is the epic saga of the American automobile industry's rise and demise, a compelling story of hubris, denial, missed opportunities, and self-inflicted wounds that culminates with the president of the United States ushering two of Detroit's Big Three car companies—once proud symbols of prosperity—through bankruptcy. The cost to American taxpayers topped $100 billion—enough to buy every car and truck sold in America in the first half of 2009. With unprecedented access, Pulitzer Prize winner Paul Ingrassia takes us from factory floors to small-town dealerships to Detroit's boardrooms to the inner sanctums of the White House. He reveals why President Barack Obama personally decided to save Chrysler when many of his advisors opposed the idea. Ingrassia provides the dramatic story behind Obama's dismissal of General Motors CEO Rick Wagoner and the angry reaction from GM's board—the same people who had watched idly while the company plunged into penury.

In Crash Course, Ingrassia answers the big questions: Was Detroit's self-destruction inevitable? What were the key turning points? Why did Japanese automakers manage American workers better than the American companies themselves did? He also describes dysfunctional corporate cultures (even as GM's market share plunged, the company continued business as usual) and Detroit's perverse system of "inverse layoffs" (which allowed union members to invoke seniority to avoid work). Along the way we meet Detroit's frustrated reformers and witness the wrenching decisions that Ford executives had to make to avoid GM's fate.


Informed by Ingrassia's twenty-five years of experience covering the auto industry for The Wall Street Journal, and showing an appreciation for Detroit's profound influence on our country's society and culture, Crash Course is a uniquely American and deeply instructive story, one not to be missed.

Paul Ingrassia is the former Detroit bureau chief for "The Wall Street Journal." Winner of the Pulitzer Prize in 1993 (with Joseph B. White) for reporting on management crises at General Motors, Ingrassia has chronicled the auto industry for more than twenty-five years. He is co-author, with White, of "Comeback: The Fall and Rise of the American Automobile Industry," and has made numerous media appearances on ABC TV's "World News Tonight" and "Good Morning America," NPR's "Morning Edition," and other programs.

Praise For Crash Course: The American Automobile Industry's Road from Glory to Disaster…

"Paul Ingrassia, with longtime and impressive credentials thinking and writing about the vicissitudes of the American auto industry, has delivered in Crash Course a devastating and compelling narrative of the ongoing hubris and miscalculation that felled one of our country's corporate treasures. Ingrassia explains clearly that the Big Three's days were numbered long before the recent bankruptcy filings of GM and Chrysler. Crash Course thus becomes a cautionary tale for an industry's failure to make the changes necessary to survive in a global marketplace until it was almost too late."—William Cohan, author of House of Cards and The Last Tycoons

"How did America's biggest business sink? It's complicated – three Titanics, dozens of icebergs, and 60 million deck chairs per year being rearranged. Only Paul Ingrassia can explain."—PJ O'Rourke, author of Driving Like Crazy

"Crash Course is one wild ride. Paul Ingrassia knows the auto industry from union hall to executive suite, from greasy plants to sleazy accounting practices. Passionate, biting and insightful, this book is a devastating critique of how capital and labor unwittingly colluded to break apart a great American industry. Rich with insider anecdote, peopled with unforgettable—and unforgivable—characters, Crash Course explains not just what happened to America's cars, but to its very soul."—Geraldine Brooks, author of March


"Paul Ingrassia is the best informed, most insightful reporter on the auto industry. A gripping decline-and-fall saga of Detroit's Big Three, Crash Course is a fascinating inside look at how ego and hubris destroyed an industry, with riveting behind-the-scenes details and great reporting. This book is a must-read account of how the Obama administration took control and upended the Detroit power structure."—Jim Stewart, author of Den of Thieves and DisneyWar

"Paul Ingrassia’s deeply insightful and highly knowledgeable chronicle of the American automobile industry should be read by anyone who is interested in finding a successful way forward, not only for American automakers but also for American manufacturing and our workers.  One might not agree with all of his views, but they should stimulate the serious debates that we need on issues critical to our future."—Robert Rubin, Co-Chairman, Council on Foreign Relations and Former Secretary of Treasury