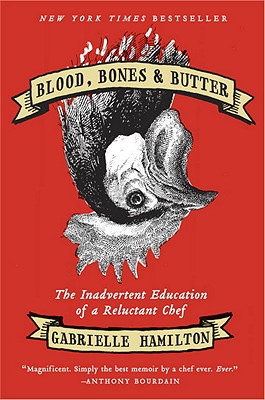 
"[A] lusty, rollicking, engaging-from-page-one memoir of the chef-owner of Prune restaurant in New York’s East Village. Hamilton opened her eating establishment without any prior experience in cheffing, but the life experiences she did have before that bold move, told here in honest detail, obviously made up for any deficiencies in heading up a restaurant and also provide material for an electric story that is interesting even if the author hadn’t become the chef-owner of a successful restaurant. An idyllic childhood turned sour when her parents divorced; her adolescence and young womanhood encompassed drugs, menial jobs, and lack of direction and initiative when it came to continued education. All’s well that ends well, however, and her story does indeed do that. Add this to the shelf of chef memoirs but also recommend it to readers with a penchant for forthright, well-written memoirs in general." – Booklist

Gabrielle Hamilton is the chef/owner of Prune restaurant in New York’s East Village. She received an MFA in fiction writing from the University of Michigan, and her work has appeared in The New Yorker, The New York Times, GQ, Bon Appétit, Saveur, and Food & Wine. Hamilton has also authored the 8-week Chef Column in The New York Times, and her work has been anthologized in six volumes of Best Food Writing. She has appeared on The Martha Stewart Show and the Food Network, among other television. She lives in Manhattan with her two sons.
Loading...
or
Not Currently Available for Direct Purchase