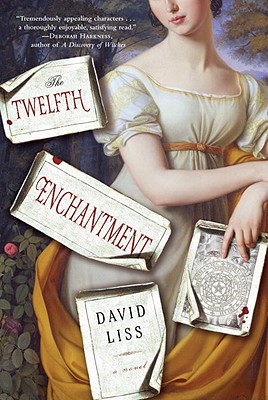 Lucy Derrick is a young woman of good breeding and poor finances. After the death of her beloved father, she is forced to maintain a shabby dignity as the unwanted boarder of her tyrannical uncle, fending off marriage to a local mill owner. But just as she is on the cusp of accepting a life of misery, events take a stunning turn when a handsome stranger—the poet and notorious rake Lord Byron—arrives at her house, stricken by what seems to be a curse, and with a cryptic message for Lucy. Suddenly her unfortunate circumstances are transformed in ways at once astonishing and seemingly impossible.

With the world undergoing an industrial transformation, and with England on the cusp of revolution, Lucy is drawn into a dangerous conspiracy in which her life, and her country’s future, are in the balance. Inexplicably finding herself at the center of cataclysmic events, Lucy is awakened to a world once unknown to her: where magic and mortals collide, and the forces of ancient nature and modern progress are at war for the soul of England . . . and the world. The key to victory may be connected to a cryptic volume whose powers of enchantment are unbounded. Now, challenged by ruthless enemies with ancient powers at their command, Lucy must harness newfound mystical skills to prevent catastrophe and preserve humanity’s future. And enthralled by two exceptional men with designs on her heart, she must master her own desires to claim the destiny she deserves.

The Twelfth Enchantment
is the most captivating work to date of a master literary conjurer.


Praise For The Twelfth Enchantment…

"David Liss takes readers on a light-hearted romp through Regency England in The Twelfth Enchantment. With an adroit mix of fact and fantasy, Liss casts heroine Lucy Derrick into a world of industrializing mill towns, mysterious enchantments, ghostly dogs, undead fairies, Luddites, and even Lord Byron and his legions of lovesick women. Charged with gathering the scattered pages of an alchemical manuscript, Lucy’s adventures teach her that appearances can be deceptive—and delightfully so. Liss’s deft touch with historical subject matter and his ability to craft tremendously appealing characters makes this a thoroughly enjoyable, satisfying read."
--Deborah Harkness, author of A Discovery of Witches

“[A] page-turning thriller . . . a thought-provoking and highly enjoyable yarn.”—Baltimore Sun

A Spectacle of Corruption

“Unusual and diverting . . . Sometimes, as the book demonstrates with a nice twist, sincerity can be the greatest means of deception.”—The New York Times Book Review

A Conspiracy of Paper

David Liss is the author of "The Devil's Company, The Whiskey Rebels, The Ethical Assassin, A Spectacle of Corruption, The Coffee Trader, "and" A Conspiracy of Paper, "winner of the Edgar Award for Best First Novel. He lives in San Antonio with his wife and children.
Loading...
or
Not Currently Available for Direct Purchase