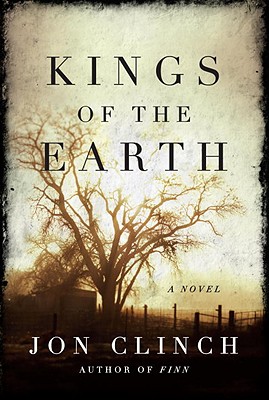 Following up Finn, his much-heralded and prize-winning debut whose voice evoked “the mythic styles of his literary predecessors . . . William Faulkner, Toni Morrison, Cormac McCarthy and Edward P. Jones” (San Francisco Chronicle), Jon Clinch returns with Kings of the Earth, a powerful and haunting story of life, death, and family in rural America.

The edge of civilization is closer than we think.

It’s as close as a primitive farm on the margins of an upstate New York town, where the three Proctor brothers live together in a kind of crumbling stasis. They linger like creatures from an older, wilder, and far less forgiving world—until one of them dies in his sleep and the other two are suspected of murder.

Told in a chorus of voices that span a generation, Kings of the Earth examines the bonds of family and blood, faith and suspicion, that link not just the brothers but their entire community.

Vernon, the oldest of the Proctors, is reduced by work and illness to a shambling shadow of himself. Feebleminded Audie lingers by his side, needy and unknowable. And Creed, the youngest of the three and the only one to have seen anything of the world (courtesy of the U.S. Army), struggles with impulses and accusations beyond his understanding. We also meet Del Graham, a state trooper torn between his urge to understand the brothers and his desire for justice; Preston Hatch, a kindhearted and resourceful neighbor who’s spent his life protecting the three men from themselves; the brothers’ only sister, Donna, who managed to cut herself loose from the family but is then drawn back; and a host of other living, breathing characters whose voices emerge to shape this deeply intimate saga of the human condition at its limits.

Praise For Kings of the Earth…

"To read a book by Jon Clinch is to enter an emotional mineshaft, a place where the darkness is profound and menacing yet lures you on with the promise of untold treasure. Like Finn, Clinch's stunning debut, Kings of the Earth is blunt and brutal yet beautifully told, a classic tale of family kinship twisted askew. It is a fine fable as well, leaving in its wake the resonance of a modern ballad—more Waits than Springsteen—about the fate of America's rural outback."—Julia Glass, author of Three Junes and winner of the National Book Award

"Kings of the Earth is the product of a truly inspired pairing.  By applying Faulkner's pointillism and stream-of-consciousness to the Upstate Gothic, Jon Clinch delivers a rich, involving yarn.  As one character says: 'Out here there is no such thing as a main road . . . Everything winds.'”—Stewart O'Nan, author of Last Night at the Lobster

Born and raised in the remote heart of upstate New York, Jon Clinch has been an English teacher, a metalworker, a folksinger, an illustrator, a typeface designer, a housepainter, a copywriter, and an advertising executive. Teaching and advertising took him south to the suburbs of Philadelphia for many years, and only with the publication of" Finn, " his first novel, was he able to return to the kind of rural surroundings he'd loved from the start: This time, in the Green Mountains of Vermont. He is married to novelist Wendy Clinch, and they have one daughter.
Loading...
or
Not Currently Available for Direct Purchase